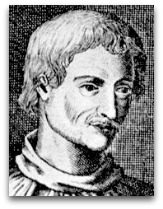 “If there were no change in bodies, no variety in matter, and no vicissitude in beings, there would be nothing agreeable, nothing good, nothing pleasant. Pleasure and satisfaction consist in nothing else but a certain passage, progress, or motion from one state to another. We can have no delight in anything present till we have been first weary of what is past. The change from one extreme to another, with all the intervals, moving from one contrary to another by all the intermediate spaces, is sure to bring satisfaction.”

— Giordano Bruno (1584), The Disengagement of the Triumphant Beast [7]

The title is a reference to the belief that moral and political regeneration will only be achieved though the expulsion of the beast of superstition.

In 1713, John Toland published an English translation of this work, and began to circulate it around England and the continent. [8]

Other
In 1584, Bruno, while living in the household of Michel de Castelnau, the French Ambassador to the court of Queen Elizabeth of England, completed three books of cosmological dialogues: The Ash Wednesday Supper, On Cause, Principle and Unity (or On Cause, Primary Origin, and the One), and On the Infinite Universe and Worlds.

In his On the Infinite Universe and Worlds, the most famous of the three, drawing on Lucretius, Nicholas of Cusa, Nicolaus Copernicus, penned views, refuting Aristotle, on many points, e.g. that "there is nothing beyond the heavens", so outrageous, to the people of his time, that he had to pen a preface stating to the effect that what people were about to read was “not a joke”. [6]

Religio-mythology | Beliefs / Denials
Bruno, according to Reginald Witt (1971), was an adept religio-mythology scholar, connecting, in the pre-Rosetta Stone era, Christianity back to Egyptian mythology: [3]

“Less than 400-years ago, Bruno suffered a martyr's death by fire. Excommunicated by an obscurantist ecclesiasticism he went to the stake for his beliefs. He was convinced that the wisdom and magic-born religion of ancient Egypt excelled the fanatical theology that burnt dissident thinkers as heretics. For him the Biblical record was on a par with the Greek myths. Refusing to retract his teachings, he met his doom dauntlessly, for he had less cause than his judges to fear the verdict of history and could snap his fingers at them in warning. Giordano Bruno, the unfrocked monk, perished on 16 Feb 1600, for his intransigent denial that Christianity was unique.”

The belief system Bruno held, according to Jennifer Hecht (2003), was “materialistic pantheism”, according to which god and the world were one; god did not make the universe, which was eternal, rather god was the universe; a repercussion of which being that Christianity was meaningless. He held that Christ was not god but merely a unusually skillful magician; he denied virgin birth and resurrection. [5]

Universe
The following, as summarized Scott Gosnell (2014), by is a synopsis of Bruno's model of the universe in comparison to the other four then-competing models: [6]

“At the end of the 16th century, at least five models of the universe were extant: the traditional Aristotelian-Ptolemaic model, with a spherical, immobile earth at the center, orbited by the sun, moon and planets embedded in crystalline spheres, surrounded by a sphere of fixed stars, and powered from an external motive source, a prime mover or primum mobile; the Copernican system, which placed the sun in the center, orbited by the earth and other planets; the Tychonian system, a hybrid in which the sun and moon orbited the earth and the other planets orbited the Sun; Digges' system, which resembled the Copernican, but with the stars distributed in an indeterminately large space, yet still centered on the solar system; and Bruno's model, of an infinitely large universe, in which every visible star was sun or planet like our own, each of which was populated with its own plants, animals and people. Bruno's model combines three accurate insights.”

Bruno, using Lucretius as a basis, extended Copernican heliocentrism to argue that the universe is made up of an infinite number of suns with their own planetary systems; and viewed matter as following an active animistic principle, in that matter is ‘intelligent’, discontinuous in structure, and made up of discrete atoms or four elements (water, earth, fire, and air).

Aquinas
Bruno opposed Thomas Aquinas’ causality argument, and, in its place, added Lucretius’ atomic theory together with Copernican heliocentrism to argue for an infinite world’s hypothesis.

Monads
Bruno also proposed the view that everything that exists is made up of infinitesimal monads, of three varieties: god (the monad of monads), souls, and indivisible atoms.

Atheism
Bruno is a debatably-labeled (Ѻ) (Ѻ) “atheist” and or “courageous thinker who lay under the stigma of atheism” (Ѻ).

Reaction end
On 17 Feb 1600, after refusing to refute his claims, i.e. would not recant, after which his tongue was cut out, he was stripped naked and burned at the stake, and his ashes were dumped in the Tiber River. Bruno's burning, in the history of atheism (Ѻ), is said to mark a transition point for the re-emergence of atheism; though, to note, his works remained on the Index of Prohibited Books until 1965, and it was not until 2000 that he received a public apology from the Catholic Church. [2]

In 1889, at dedication statue was erected at the site of his demise, the central Roman market Campo de’ Fiori, the dedication ceremony of which being attended by Herbert Spencer and Ernst Haeckel. The inscription reads:

“To Bruno, from the generation he foresaw, here, where the pyre burned.”

Influence
In the centuries to follow, Bruno's ideas were held up for ridicule, debate, or inspiration. In 1664, Margaret Cavendish, e.g., wrote an entire series of poems against "atoms" and "infinite worlds" in Poems and Fancies.

Quotes | Employed
The following are quotes employed by Bruno:

“The seeds together in this world of ours, must be confessed in other realms there are still other worlds, still other breeds of men, and other generations of the wild.”

Quotes | On
The following are quotes on Bruno:

Quotes | By
The following are noted Bruno quotes:

“They spoke Latin well, were proper min, of good reputation, fairly competent in learning, but mediocre in education, courtesy and breeding, for ‘tis yes my master; yes my father, or my mistress; yes forsooth; elect indeed, with their long robes, clad in velvet. One wore two shining gold chains about his neck while the other, by god, whose precious had bore twelve rings, had rather the appearance of a rich jeweler. Did they know aught of Greek? Aye and also of beer. One was the herald of obscurity and the other the bailiff of the goddess of presumption.”

— Giordano Bruno (1584), commentary on his interview with the Oxford theologians [4]

“There is no absolute up or down, as Aristotle taught; no absolute position in space; but the position of a body is relative to that of other bodies. Everywhere there is incessant relative change in position throughout the universe, and the observer is always at the center of things.”

— Giordano Bruno (1584), On Cause, Primary Origin, and the One; this, supposedly, is a close paraphrase of Epicurus (“Letter to Herodotus”)

“We have experience that sense-perception deceives us concerning the surface of this globe on which we live, much more should we hold suspect the impression it gives us of a limit to the starry sphere.”

— Giordano Bruno (1584), On the Infinite Universe and Worlds (character: Philotheo)

“Truth does not change because it is, or is not, believed by a majority of the people.”

“A spirit exists in all things, and no body is so small but contains a part of the divine substance within itself, by which it is animated.”

“Perhaps you, my judges, pronounce this sentence against me with greater fear than I receive it.”