In hmolscience, god fog refers to a general type of ingrained, unaware, or belief system rooted admixture of god talk, god baggage, and god hypothesis (or god theory), blended into a illusionary metaphorical mental "fog", mist, or smoke-like confusion, left in the wake of the god void, oft-resulting in the "god face" look, which clouds thinking in the minds of people, even in atheists, when deeper questions or subject matter in the humanities are discussed, in respect to how the physical, chemical, and or natural sciences, subjects which are "uncontaminated by spiritual values", as Judson Herrick (1930) put it, and god-disabused, as Laplace (1802) said (see: year god was disabused from science).

A13. “The ridiculous arises out of a moral contrast, in which two things are brought together before the mind in an innocent way.”

A13. “We laugh when the elements of a moral discrepancy are brought home to our senses in a harmless way.”

“God is dead: but considering the state man is in, there will perhaps be caves, for ages yet, in which is shadow will be shown.”

On 30 Dec 1953, when John Q. Stewart gave his “Remarks on the Current State of Social Physics”, to the American Association for the Advancement of Science conference meeting in Boston, which prompted Rockefeller science-funding chief Warren Weaver to cut-off funding to the Princeton social physics project, per reasons as detailed here, this was a prime example of “god fog” clouding the judgment of the mind of Weaver; a well-embodied example of the mindset of the bulk percentage of the mindsets of modern world.

In 5 Apr 2016, Libb Thims, while making the “house divided” (against itself) diagram (an extra-annotated version of which is shown adjacent) — for the Herrick’s Humpty Dumpty article, i.e. to show how, in Judson Herrick’s 1930 view of the University of Chicago, at the dedication of the new "Social Science" building, the “humanities” departments were house-divided against the physical science, chemical science, and natural science departments — was attempting to visually show, e.g. see Modern University (version 7), how there was a sort of “higher powers” fog, smoke, or mist hovering over the minds of people, whether young children (the emotionally-heated parental objections to the 2015 “Zerotheism for Kids” lectures comes to mind) or college students (the 2010 UIC bioengineering thermodynamics student hand-written (Ѻ) lecture reaction commentaries comes to mind), college professors (the 2009 Moriarty-Thims debate comes to mind), and or everyday people (e.g. thread posts), in the humanities departments, used the following "higher power" labeled photo of a village enveloped in fog or morning mist, to get at this idea of how even some of the most devout atheists have this "god fog" in their mind, in respect to theories about the humanities: 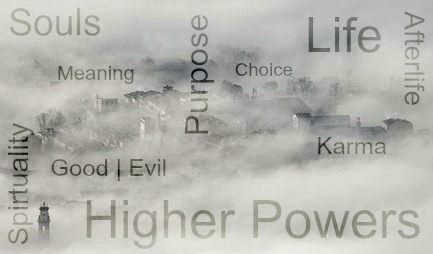 as compared to the physical, chemical, and natural science departments, which were all expunged of any and all type of god theory, god talk, or god baggage, etc., in the 19th century and early 20th century (see: year god was disabused from science).

Adjacent is a 2016 rendition of Thims' own personal "god fog", particularly in respect to fact that it is approaching the 10-year mark in regards to the grappling with problem of issues with the term "life" stage (see, e.g., Lotka's 1925 Regarding Definitions), e.g. as found in Thims' "Molecular Evolution" (2007) chapter, to the defunct theory of life (2009) stage, to life terminology upgrades (2012) stage, to life does not exist (2014) stage, to the abioism (2015) stage, to the (Apr 2016) viewing of the 2011 To Have Done With Life conference videos, to Thims' own conference presentation stage, on this topic, i.e. talk on Lotka's Jabberwock at BPE 2016 (Jun 2016), and it is still difficult to completely expunge the roots of the weed out of his head.

While, to go through one example, it is patently obvious, to the modern erudite thinker, e.g. Thims, that the “soul does not exist” (similar to the “spirit does not exist” views of the 18th century thinkers), i.e. Thims is an adamant asoulist, the fog left behind in the wake of this so-called god fog based "soul void" is well-evidenced by what the great geniuses have said on this topic:

Polls
On 17 Apr 2016, Thims did an informal sampling poll of seven people, of various levels of religious belief or non-belief, in respect to what their own "personal" god fog was, the way a Bible-thumper might deny evolution owing to belief in Adam and Eve, or a Buddhist might deny the non-free will view owing to a belief in karma and choice, finding the following:

The one atheist, in the group, stated they had dismissed all the other terms, long ago, but that the "good/evil" distinction still was a bit foggy.

“It's less contentious that there are things that we can do to people's brains, with their consent of course and with good evidence that it will work and not harm them and all of the things we expect from medical interventions, and there's a debate about where’s the line between fixing a problem versus enhancement and what are the ethical issues that come with that, and I think that's interesting and tricky. But whether you have a full-blown metaphysical view of human nature where we're bodies and souls joined somehow, everybody agrees that there's a body.”

— Joshua Greene (2014), “Reply to Jim Wagner (president of Emory University, and vice-chair of bioethics meeting)”; in: “Presentation in Presidential Commission for the Study of Bioethical Issues, Meeting 17, Session 6”, Jun 10

“I am inclined to think that these are important questions but that they are orthogonal questions. Not that everything isn't related in interesting ways, but I think that whether or not you think, when it comes to the proximate causes of behavior, just brains, or whether you think that we are brains that are in some sense being animated by minds or souls that are distinct from brains, brains are still what most immediately cause behavior.”

— Joshua Greene (2014), “Reply to Jim Wagner (president of Emory University, and vice-chair of bioethics meeting)”; in: “Presentation in Presidential Commission for the Study of Bioethical Issues, Meeting 17, Session 6”, Jun 10

“Another point is that what's really being tested in these studies is how good we are at detecting when we first become conscious of an urge or a decision or intention. And it may be that that's really not very important. We might be a little bit off, like 200, 300 milliseconds off. What may be most important is the conscious reasoning that influences the decision making. When I say conscious reasoning, I'm not talking about anything immaterial or involving a soul or anything of the sort. It's brain activity. It's just brain activity of a certain kind.”

— Alfred Mele (2014), “Presentation at Meeting 17, Session 6, of Presidential Commission for the Study of Bioethical Issues”, Jun 10