In famous publications, An Almost Magical Attraction: Goethe’s Elective Affinity and the Chemistry of its Time is a 1987 book, by Jeremy Adler, based on his 1977 or 1978 PhD dissertation, wherein he systematically goes through, in robust affinity history theory, the chemists, chemistry, affinity theory, and affinity tables most-likely used by Goethe’s 1809 physical chemistry-based, human chemical theory-conceptualized novella Elective Affinities; a subject precluded by the fact that Goethe, contrary to his usually practice, destroyed all his notes to this work. [1]

Adler can be compared, in some sense, to Thomas Young and his preliminary 1820 translation work of the Rosetta Stone—a previously undeciphered trilingual stele, written in: hieroglyphs, demotic script, and Greek; Goethe’s Elective Affinities being a partially undeciphered multi-lingual coded treatise written in three-plus languages: affinity chemistry, auto-existography, scientific love theory (classical), and a new morality system, to name the four main codes, written in layers, and hidden, as Goethe commented. Adler, in short, did the first decoding work on the scientific underpinnings of Goethe’s human chemical reaction theory.

Overview
In 1969, Jeremy Adler, in London, began to work on the theoretical dissection of Goethe’s Elective Affinities as a PhD thesis under professor Claus Bock (compiler of the 1960 book Goethe the Critic). Bock’s suggestion was to examine the connection between Swedish chemist Torbern Bergman, particularly his 1775 textbook A Dissertation on Elective Attractions, and Goethe's novel. In this direction, Adler soon discovered links to many other chemists, beginning with the works of French chemist Pierre Macquer, i.e. his 1849 Elements of Theoretical Chemistry (Elemens de Chymie Theorique) and his 1778 Dictionary of Chemistry (Dictionnaire de chymie), and the other dictionary writers, and then extended his search to as much of the tradition as he could uncover.

John McEvoy (later at Pittsburgh) and his supervisor, Satish Kapoor (Sussex), gave Adler assistance with the background to the history of chemistry. Satish was working on French chemist Claude Berthollet at the time, and suggested to Adler that he switch to the history of chemistry; and so Adler joined the outfit of historians of science in England that ranged from the old masters, such as Joseph Needham and Walter Pagel, to his colleagues, like Roy Porter, Nick Jardine and others, interested in linking literature and science. Needham, for instance, references Adler’s work in Science and Civilization in China in his chapter concerning Chinese affinity theory. Adler also had good contact with English affinity chemistry historian Alistair Duncan, who was working on the history of affinity theory. With this basis of support and study, analysis of the vocabulary in Goethe's book convinced Adler that the use of affinity theory to explain human interactions and life was a thorough-going theme. [3]

In 1977, Adler, supposedly, completed his PhD on Goethe and his elective affinity theory.

In 1987, Adler published his PhD, either revised or exact, in book form, as An Almost Magical Attraction: Goethe’s Elective Affinity and the Chemistry of its Time (Eine fast magische Anziehungskraft: Goethe’s 'Wahlverwandtschafte' und die Chemie seiner Zeit), shown above, which has yet to see an English translation.

The following diagram (below left), from this work (pg. 75-77), is a reprint of Goethe's 4-7 Oct 1793 notebook diagrammatic representation of the "double elective affinity" reaction experiments with Berlin-blue liquor, shown with a partial translation of some Adler's commentary:

Goethe also appears to have had direct access Torbert Bergman's chemistry. He had two of his mineralogical writings and mentions him in his geological work. Apparently he also knew Tabor's translation of the little physical and chemical plants in the stands from the attraction, since it about 1793 for work on chemical paints a passage from the second band wrote themselves out. The body of the essay comes from the metallic Präcipitaten, namely the fifth part, the <Farben Metallniederschlag>. Bergman points there emphatic attention to the <Verwandtschaft>. He claims: << That resolution seye an effect of attraction, can no longer be doubt in our days. Put this sentence ish so the reason. >> He calls the double << [e] >> Attraction, refers explicitly to the Attractionstabelle << >> << and finally refers to his treatise of the attractive forces. >>

In 1990, Adler published a one chapter English translation synopsis of his work, entitled "Goethe's Use of Chemical Theory in his Elective Affinities", the first page of which is as follows: [2] 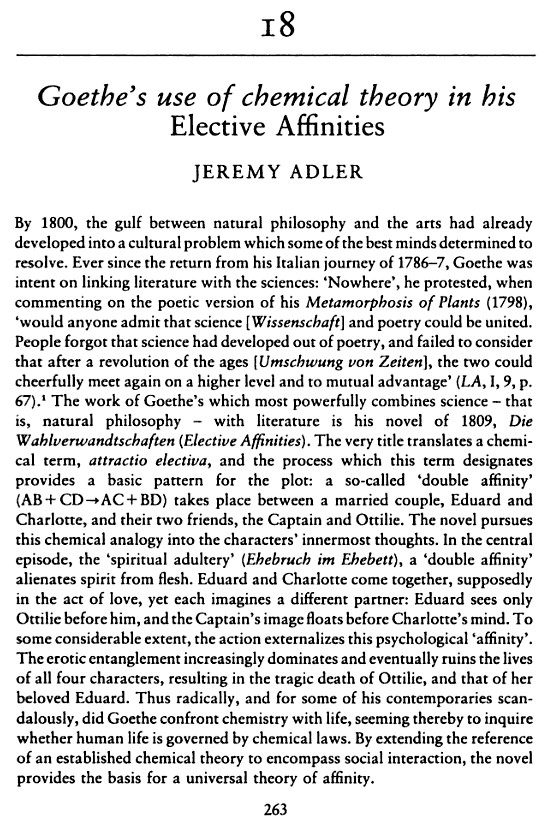 Thims | Human chemistry
Adler's 1990 chapter was a veritable gold mine, in the mind of Libb Thims, much of which went into the framework of chapters 10: “Goethe’s Affinities” and 11 “Affinity and Free Energy” of volume two of Human Chemistry.

“At first glance it might seem surprising that it is a British scholar [Adler] of German literature who tackles this particular aspect of the ‘German genius’, Goethe, but unfortunately enough in Germany the division between the ‘Two Cultures’ is still considerably deeper than in the English-speaking world. Recently, however, the attempts in interdisciplinary research to build a bridge and to indicate the fertile interplay between science and poetry are increasing, even in Germany. Adler’s book represents an important step in this direction.”

— Karin Figala (1988), book review of Adler’s Goethe’s Elective Affinities and the Chemistry of its Time [5]