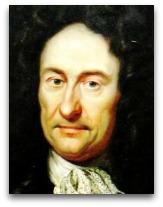 Monadology | Souls + motion
In 1696, Leibniz began to employ the term “monad”, which he conceived as a solution to dualism, the mind-body problem, and difficulties over the concepts of origin of forms, entelechies or souls. [4]

In 1714, Leibniz penned a two short texts on his philosophical system, namely Principles of Nature and Grace Found in Reason (Principes de la nature et de la grâce fondé en raison) and Monadology, in the latter of which he posited that there are indefinitely many substances , i.e. “monads”, individually 'programmed' to act in a predetermined way, each program being coordinated with all the others, according to which any interaction between substances was mere appearance. [4] The following is an example description of monads: (Ѻ)

“It is very evident that created substances depend upon God who preserves them and can produce them continually by a kind of emanation just as we produce our thoughts. God alone is the ultimate unity or the original simple substance, of which all created or derivative monads are the products, and arise, so to speak, through the continual outlflashings of the divinity from moment to moment.”

Leibniz, in section cited by Lawrence Henderson (1917) in a discussion of the final cause problem, stated the issue as follows: [5]

“Descartes saw that souls cannot at all impart force to bodies, because there is always the same quantity of force in matter. Yet, he thought that the soul could change the direction of bodies. This was, however, because at that time the law of nature, which affirms also the conservation of the same total direction in the motion of matter, was not known. If he had known that law, he would have fallen upon my system of pre-established harmony. According to this system bodies act as if (to suppose the impossible) there were no souls at all.”

Leibniz, in other sections, states the following:

“Every organic body of a living being is a kind of divine machine, or natural automaton, infinitely surpassing all artificial automatons. Because a machine constructed by man's skill is not a machine in each of its parts; for instance, the teeth of a brass wheel have parts or bits which to us are not artificial products, and contain nothing in themselves to show the use to which the wheel was destined in the machine. The machines of nature, however, that is to say, living bodies, are still machines in their smallest parts ad infinitum. Such is the difference between nature and art, that is to say, between divine art and ours.”

“There is nothing fallow, nothing sterile, nothing dead in the universe. If there were a vacuum, it is evident that there would be left sterile and fallow places in which, nevertheless, without prejudice to any other things, something might have been produced. But it is not consistent with wisdom that any such places should be left. In every particle of the universe a world composed of an infinity of creatures is contained. Just as there is no vacuum in the varieties of the corporeal world, so there is no less variety among intelligent creatures.”

In 1893, Gabriel Tarde attempted to extend Leibniz’s monadology theory to sociology, intermixed with semi-modern views on physics and chemistry, supposedly in the form of a proto-sociochemistry. [6]

Leibniz, the early 18th century, published two works, namely: Theodicy (1710) and Essay on Man (1734), wherein he put forward the so-called optimistic solution to the so-called problem of evil, namely that this is the best of both possible worlds.

In 1759, Voltaire penned his satirical Candice, a parody of Leibniz’s problem of evil solution, the key section being the following:

“Appalled, stupefied, distraught, covered in blood and shaking uncontrollably, Candice said to himself: ‘If this is the best of all possible worlds, what must the others be like?’”

“I cannot assign to the Theodicy any other merit than that it gave rise to the immortal Candice of the great Voltaire. In this way, of course, Leibniz’s oft-repeated and lame excuse for the evil of the world, namely that the bad sometimes produces the good, obtained proof that for him was unexpected.”

Similarly, in his 1686 De Veritatibus Primis, Leibniz famous stated “everything that is possible demands to exist.”

Calculus notations
Leibniz was also the first to employ the use of the symbols for differentiation "d" and integration "∫", which are used so predominately in thermodynamics on the various integrations of the working body. According to Leibniz's notebooks, a critical breakthrough occurred on 11 November 1675, when he employed integral calculus for the first time to find the area under a function y=ƒ(x). He introduced several notations used to this day, for instance the integral sign ∫ representing an elongated S, from the Latin word summa and the d used for differentials, from the Latin word differentia. This ingenious and suggestive notation for the calculus is probably his most enduring mathematical legacy. Leibniz did not publish anything about his calculus until 1684. [2]

Leibniz’s version of calculus, to note, was used, over that of Isaac Newton’s, by French engineer Lazare Carnot, who made use of Leibniz’s ideas about mechanical energy conservation.

Sufficient reason | Principle
Leibniz, in one of his works, proposed a so-called "principle of sufficient reason", which is oft-employed by theists in modern days to argue about things; the following are related quotes:

“The law of sufficient reason, applied to actual existents, reduces itself to the assertion of final causes.”

“This difficulty Samuel Clarke effectively pressed home in his controversy with Leibniz. The celebrated ass of Buridan, being, by hypothesis, a perfectly rational ass, was unable to choose between two equally large and equally appetizing bales of hay equidistant from his nose; having no sufficient reason for preferring one to the other, the sagacious animal starved to death in the midst of plenty. Clarke pointed out, in substance, that Leibniz attributed to his Maker precisely such an irrational excess of rationality.”

Here, Leibniz was caught on the question of volition:

“Where there is no preponderance of value in one contemplated object rather than another, an intelligent agent would be as powerless to move as a piece of matter in an equilibrium of forces.”
— Arthur Lovejoy (1933), The Great Chain of Being (pg. 169)

Quotes | On
The following are quotes on Leibniz:

“So far as the main part of the work is concerned, it is principally about the right understanding and perception of the universal vessel or container of all things, which I, to use one word, call ‘space’ but not understood in its usual three-dimensional sense, but as that in which every body and every substance either has its being and subsistence or could so have. Space yields to nothing and is not displaced according to the volume of the body it receives; it is permanent and immobile, everywhere in everything and through everything, whether corporeal or incorporeal and to which nothing brings being whether it is occupied or empty.”

“If there is to be any matter at all, then it must be continuous; there can be no empty spaces where matter might have been but is not. Leibniz therefore vehemently attacked the physical vacuists.”

Quotes | By
The following are noted quotes by Leibniz:

“It is a hypothesis worthy of belief that in the course of the vast changes, which have taken place in the conditions of the earth’s crust, even the species of animals have many times been transformed. It is possible, that at some previous time, many species which have in them something of the cat, such as the lion, the tiger, the lynx, may have been the same race, and may now be regarded as new sub-varieties of the original cat species.”

“The earliest animals, probably, were marine forms, and amphibia and land animals are descended from these.”

“I should suppose that the souls which will some day become human have, like those of the other species, been in the seeds, and in the ancestors, up to Adam, and have consequently existed since the beginning of things, always a sort of organized body.”

“The eternity which is reserved in the future for all animate souls, or rather animate beings, is a vast field, designed to give, though by degrees, the greatest perfection to the universe.”

“To create everything from nothing, one is sufficient.” (Latin original: “Omnibus ex nihilo ducendis sufficit unum.”)

— Gottfried Leibniz (1697), letter to Rudolph Augustus (Ѻ), comparing the binary system to the creation of the universe out of nothing (0) by God's word (1)

“Men are linked with the animals, these with the plants and these with the fossils, which in turn merge with those bodies which our senses and our imagination represent to us as absolutely inanimate.”

“What if these theories were true, and we were magically shrunk and put into someone’s brain while she was thinking, we would see all the pumps, pistons, gears and levers working away and we would be able to describe the workings completely, in mechanical terms, thereby completely describing the thought processes of the brain. But that description would not contain any mention of thought! It would contain nothing but descriptions of pumps, pistons, levers!”