In pantheons, Greek pantheon refers to the consortium of gods, supreme gods (e.g. Zeus) and god families (e.g. Olympians, Titans) developed by Greek writers and theologians in predominantly the years 850BC to 650BC, most of which is based on a recension and rescripting of the Egyptian pantheon.

Overview
In c.700BC, Hesiod, as described in his Theogony, followed by Solon (c.590BC), and others, e.g. Lycurgus (c.840BC), Homer (c.800BC), Orpheus (c.680BC) (Ѻ), and Pherecydes (c.430BC), after studying in Egypt, in Heliopolis and Memphis, formalized their own state religion pantheon (See: Greek mythology) based, in outline, on the above Egyptian pantheon, then prevalent (see: histomap), with modifications and reductions; the gist of which, as outlined below [2], being that Ogdoad (see: Hermopolis creation myth, 2150BC) became "chaos", which gave birth to Gaea (or Geb) and Uranus (or Nut), from the Ennead; Amen-Ra became Zeus, the new supreme god; the model of there being two competing pauts or god groups, namely the Ogdoad and the Ennead, mixed with the eternal god camp battle, of good and evil (or light and darkness) between Horus and Set (or Ra and Apep, depending), became the model for the battle between the Titans and the Olympians; Osiris became Dionysus; Isis became Demeter; Nephthys became Persephone; Horus became Apollo; Shu became Atlas; Khnum became Prometheus; Thoth became Cronus and or Hermes, depending; Hathor became Aphrodite [3]; Neith (Ѻ) became Athena [3]; Ptah became Hephaestus; Set became Typhon; among others (see: god character rescripts), and the gods took human forms (as opposed to human-animal forms, in the Egyptian scheme): 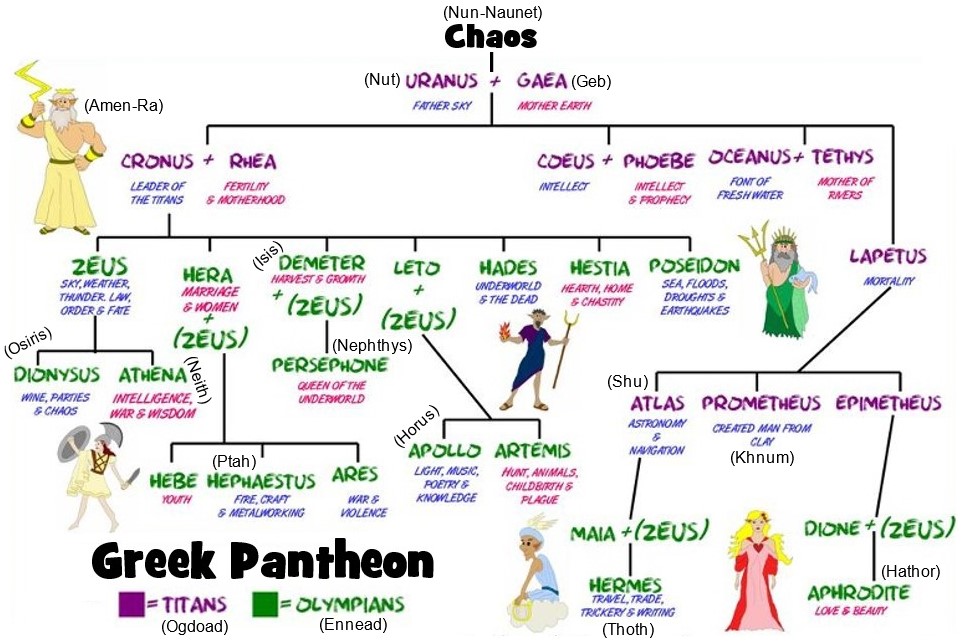 In 330BC, Epicurus, aged 12 or 14, depending, studied Hesiod's Cosmogony at school, and finding that everything was explained to arise from chaos, he cried out and asked: ‘Whence, then, came chaos?’ His teacher, likely being ignorant of the fact that Hesiod’s model of chaos, was culled from the Nun and Naunet god pair, of the Hermopolis Ogdoad, however, had “no reply that would content him” (Lange, 1975), after which he began to develop his own philosophy (see: Epicureanism); thereafter coming in contact with atomic theory of Democritus, which expanded into the form of 300 scrolls, which eventually found there way into the hands of Lucretius, who transformed this logic into the now famous publication On the Nature of Things, which later, following the dark ages, seeded the enlightenment.

“The Greeks got the names of all their Olympian gods from the Egyptians except Poseidon and Hera.”

“The initiatory rites of Demeter in Eleusis were transferred from Egypt (1.29.2). The rite of Osiris is the same as that of Dionysus and that of Isis very similar to that of Demeter; the names alone having been interchanged, and the punishments in Hades of the unrighteous, the Fields of the Righteous and the fantastic conceptions, current among the many - all these were introduced by Orpheus in imitation of the Egyptian funeral customs. (1.96.4-5). Isis, after having invented the practice of medicine, taught this art to her son Orus [Horus], named also Apollo, who was the last of the gods that reigned in Egypt.”

“The trumpets they conceal in Bacchic wands (see: thyrsus), as Socrates has stated in his treatise on The Holy Ones. Furthermore, the tales regarding the Titans and the rites celebrated by night agree with the accounts of the dismemberment of Osiris and his revivification and regenesis.”

“Herodotus upon this occasion says, that the whole romance of the soul and its transmigrations was invented by the Egyptians, and propagated in Greece by men, who pretended to be its authors. I know their names, adds he, but shall not mention them (lib. 2). Cicero, however, has positively informed us, that it was Pherecydes, master of Pythagoras. Tuscul. lib. 1, sect. 16. Now admitting that this system was at that period a novelty, it accounts for Solomon's treating it as a fable, who lived 130 years before Pherecydes.”