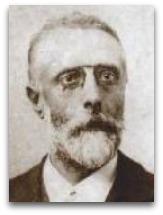 In hmolscience, Guillaume de Greef (1842-1924) (SN:19) was Belgian socialist noted for his 1910s commentaries on chemistry and physics applied to sociology.

Overview
In 1903, de Greef, in his “Introduction to Sociology”, discussed concepts such as molecular sociology and speculated on the possible application of chemistry and physics principles to the humanities, albeit alluding to the supposed dangers of Auguste Comte’s social theories: [1]

In respect to social gravity theory, the following is an example speculation of physical chemical based sociology: [1]

“Physics and chemistry show us in a general way that the solid, liquid, and gaseous substances which compose the terrestrial globe are not indiscriminately mingled: the rocks, the liquids, the gases occupy definite, limited spaces. They show a certain order in their static disposition; this order and these limits are the conditions of their equilibrium.

Thus, just as our solar system gravitates around an unknown center, and just as in our system the planets gravitate around the sun, we also see all the bodies upon the earth equilibrated about its center by gravitation, and all the molecules of inorganic aggregates equilibrated differently among themselves, according to their different conditions, under the name of molecular attraction. In the same way, also, all the chemical modifications are the result of molecular equilibrations determined and limited by reciprocal relationships. Thus, the general law of limitation appears to us as inseparable from the very conception of aggregate or mass.

Chemistry, by showing us atomical and molecular equilibrations of greater and greater complexity, prepares us for the consideration of a new aspect of statics. The law of definite proportions, and that of multiple proportions, are examples of chemical limits. Indeed, it will remain with us to see whether this law of limitation extends to the organic, psychic, and social world.”

Education
De Greef, born in Brussels, was raised by a family of free thinkers and artists; in his youth he read progressive philosophers, such as Voltaire; and in college he was attracted to the works of Henri Saint-Simon and Charles Fourier, before coming to Pierre Proudhon, who became his greatest influence. [3]

De Greef was a professor of sociology at the University of Brussels for a number of years; supposedly working an a synthesis and extension of the works of Auguste Comte and Herbert Spencer. [2]