In engines, gunpowder engine is one that employs gunpowder to produce a vacuum inside the piston and cylinder causing the atmospheric pressure to perform work in driving the piston downward to eliminate the vacuum. [1]

In 1508, Leonardo da Vinci designed an upside-down cannon barrel, fitted with a piston, as sketched by him below (left), which had a rod attached to the bottom of the piston, which he stated could be used to lift a weight of large size, if gunpowder was ignited inside the cannon, therein consuming the oxygen inside of the working body volume, thereby making a vacuum, which, owing to the force of the atmospheric pressure, would lift the weight: [3] 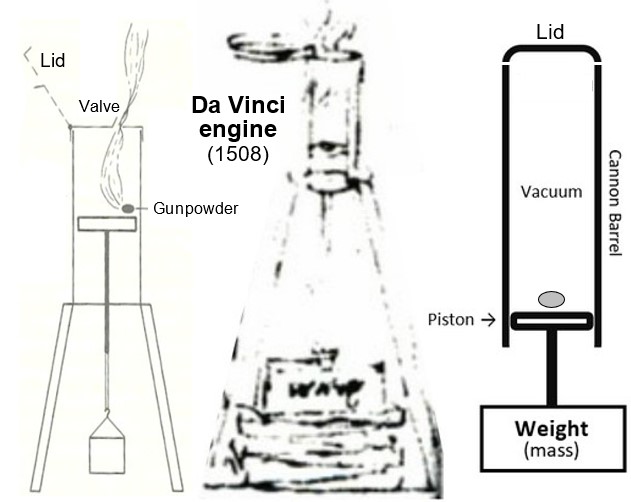 Morland
In 1661, Samuel Morland, supposedly, published designs for engines that used gunpowder to facilitate the raising of water. 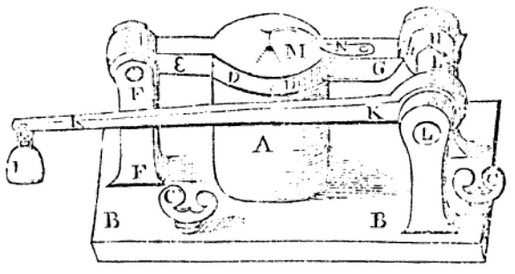 Triers, or "powder triers" (Ѻ), are devices for testing the strength of various gunpowders; one of the earliest built, being the the "hinged lid" design built by John Bate (1634). [4] Hooke's design was unique in that it was capable of raising a variable weight (as shown above, left). Hooke also used this device for the bending of springs. Joseph Needham classifies Hooke's trier as an "almost gunpowder engine", as follows:

“Hooke’s gunpowder trier was, in fact, almost a gunpowder engine, because it was capable of raising a variable weight, and was later applied to the bending of springs.”

In 1675, Hooke also understood the basic principle of the vacuum in respect to combustion and the raising of a weight:

“The vacuum left by fire lifts a weight.”

— Robert Hooke (1675), “A New Invention in Mechanics of Prodigious Use, Exceeding the Chimera’s of Perpetual Motions for Several Uses”

In respect to the above "patient secret", as Hooke conceptualized it, to his "new mechanical invention" that uses the void made by fire to lift a weight, we note that the Huygens-Papin gunpowder engine experiments (1673), conducted in France, were published, not only in Paris (1674) in French, but also in the form of five papers, by Huygens and Papin jointly, in the Philosophical Transactions of the Royal Society, Hooke being the chief experimenter of the Royal Society, from 1663 to about 1680. No doubt, Hooke, being affronted by the presumed "claims to priority" of Huygens and Papin, in respect to the invention of the gunpowder engine, having now read a report of their work in English, likely had something similar in mind prior to Feb 1673, the date of the Huygens-Papin experiments (see: below), and by penning the above principle, was attempting to make a stake to priority, or something along these lines [?].
We also note that from 1676 to 1679, “Denis Papin”, the key connecting figure in the history of the invention of the gunpowder engine, assisted Robert Boyle, a good friend of Hooke, in air pump experiments; also that from Jul to Dec 1679, Papin was employed at the Royal Society by Hooke as an amanuensis.

Huygens
On 10 Feb 1673, Christiaan Huygens, who had employed Denis Papin as his assistant since 1671, stated that he had a working gunpowder engine:

“I have constructed an engine for obtaining a new motive power by means of gunpowder and the pressure of air.”

He also gave the following sketch, which shows a piston, with two rope attachments, at the top of a cannon, pointed upwards, held by a frame at its base, with a port at the bottom for igniting a charge of gunpowder, along with a watery leather escape vent attached to the upper left side of the cannon: [7]

On 22 Sep 1673, Huygens sent the following simplified sketch of his new gunpowder engine to his brother, which shows the rope and pulley attached to a weight to be raised, and also shows two vent baffles: [8] 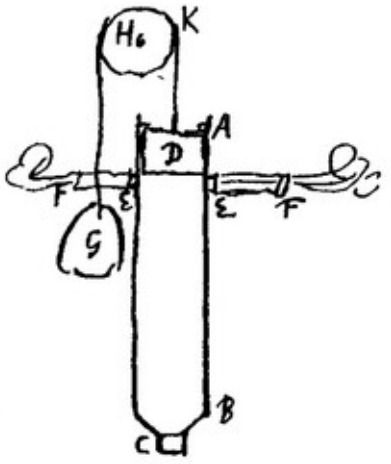 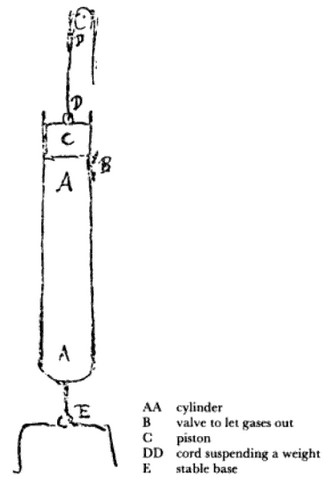 It operated such that the "partial vacuum" produced in the cylinder, as the gases left, which brought down the piston and accordingly raised the weight suspended from the pulley. Huygens said the following about his device:

“The force of cannon powder [gunpowder] has served hitherto [he wrote] only for very violent effects such as mining, and blasting of rocks, and although people have long hoped that one could moderate this great speed and impetuosity to apply it to other uses, no one, so far as I know, has succeeded in this, or at any rate no notice of such an invention has appeared.”

In 1674, the results of the Huygens-Papin gunpowder engine experiments were published in Paris as Experiments on the Void (Experiences du Vuide); in 1675, they also published their results in the form of five papers, by Huygens and Papin jointly, in the Philosophical Transactions of the Royal Society.

In 1678, Huygens had the following working model built: 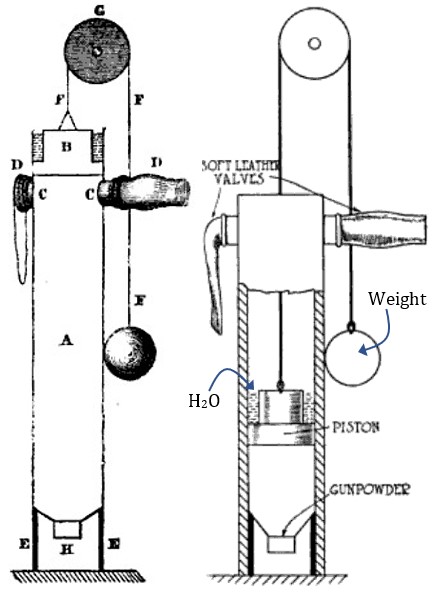 In 1680, Huygens, in his “A New Motive Power by Means of Gunpowder and Air”, formerly gave an account of his new gunpowder engine. [2]

In 1682, Huygens had built a larger piston and cylinder device, as shown below right, and had successfully shown that a dram (1/16th of an ounce) of gunpowder, in a cylinder seven or eight feet high and fifteen or eighteen inches in diameter, could raise seven or eight boys (or about 1,100 pounds) into the air, who held the end of the rope (photo above, right). 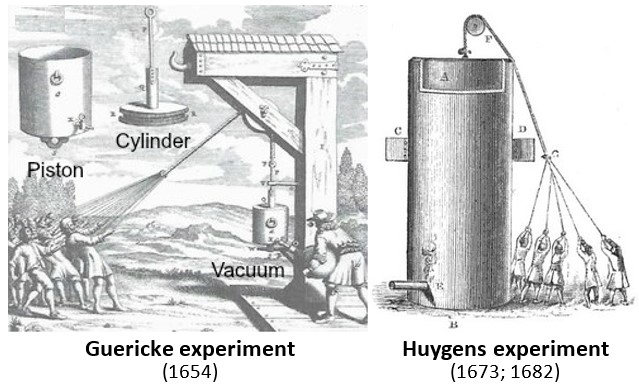 “I have seen some surprising effects in raising weights and men pulling the rope. If we could well see the air it would be much more ...”

To summarize, what is clear at this point is that Huygens (and or Papin) in making his piston and cylinder design, aside from the use of "gunpowder" to make the vacuum, is employing the engine designs of Otto Guericke (1654), which had been published by Gaspar Schott in 1657 for global consumption (see: Schott diagrams). So the question, at this point, is: whose idea was it to use gunpowder to make the vacuum: Huygens or Papin, or possibly did one of the two hear about da Vinci's 1508 gunpowder engine design and or experiment? Huygens' design, to note, is basically the same as Da Vinci's design, except that the vents or release valves are on the side, whereas Da Vinci put his escape valve on the top. As to the "date" of Huygens gunpowder engine experiments, English technology historian Graham Short (Ѻ) conjectures that they commenced following the publication of Guericke's New Magdeburg Experiments on the Vacuum of Space (1672):

“The publication of von Guericke's New Magdeburg Experiments on the Vacuum of Space in 1672, in which a much more sophisticated version of the weight-lifting rig of1654 takes its place, seems likely to have been the event which set the stage for Christiaan Huygens to think about how to exploit the vacuum in a less labor-intensive way than von Guericke's. His invention in early 1673 of a gunpowder engine was designed to do just that. Instead of having two burly men labor with an air pump for many hours to create a reasonable vacuum, Huygens dreamt of creating a rapid sequence of vacuums by exploding very small quantities of gunpowder at a brisk tempo.”

Huygens, on an aside, also described other future uses for such a device:

“This new motive power could be used, in the future, for raising water or weights, working mills, driving vehicles on land or water, or even for aerial vehicles powered in such a way.”

“I think that a flexible wooden tail at the stern of a boat, as I have visualized it, and as I believe they make use of in China, would be a good application for this, if moved by the force generated in this cylinder.”

Huygens calculated, supposedly, that a single pound of gunpowder possessed enough energy to raise 3,000lbs 30 feet and that a 3ft diameter cylinder would give upwards of 40HP, according to Joseph Needham’s footnoted translations (note: HP or horsepower was not yet an invented unit in this century).
Hautefeuille
In 1678, Jean Hautefeuille published designs for engines that used gunpowder to facilitate the raising of water, one of which employed a piston and cylinder.

Misattribution
Of note, Peter Drucker, in his Innovation and Entrepreneurship (2014), misattributes the actual construction of the first gunpowder engine to Robert Boyle, and that this “Boyle engine” was the one that fouled with each explosion, and that his assistant Denis Papin was the one who realized the plans for the first working combustion engine. (Ѻ) Boyle, however, does not seem to have been ever cited as having originated any gunpowder engines; his main focus was the pneumatic engine.

Quotes
The following are related quotes:
-

“At the moment of the explosion, the gases formed swept out most of the air through a valve which was then immediately shut, so that as everything cooled a partial vacuum was produced, and the piston was sucked down with great force—but not the whole way, for, as Huygens noted, about one-sixth of the air and gas remained. The down-stroke was therefore incomplete.”

“As early as 1508, Leonardo da Vinci was speculating on yet a further use for gunpowder's explosion: an engine that could be used to lift weights or pump water. In 1673, the Dutch scientist and inventor of the pendulum clock, Christiaan Huygens, drew up a plan for an engine that could use a controlled detonation of gunpowder to build pressure and drive a piston inside a metal tube. He optimistically postulated that his newfangled device would one day enjoy widespread uses, such as powering mills and propelling carts. In the following years [1674] Huygens's assistant, Denis Papin, built the first model of the gunpowder engine at the Academie Royale des Sciences in Paris, where he hoped that it could be used to mechanically suck water from the Seine River and spray it skyward from Louis XIV's famous fountains. Alas, gunpowder combustion was not ideally suited to the tranquility of the fantastically manicured and tranquil gardens. Not only was it loud, but the explosion was too powerful and most of the gasses had to be released through a system of valves as the piston was pushed out; as the remaining gasses cooled they sucked the piston back, but with an insufficient vacuum because not all the gasses could be evacuated from the cylinder.”