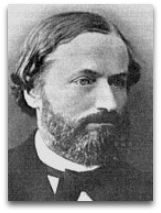 Influence
In 1871, a newly minted undergraduate Dutch physicist Heike Kamerlingh-Onnes, winner of the 1913 Nobel Prize in physics for his low-temperature thermodynamics work, went to Heidelberg where he studied under German chemist Robert Bunsen and Kirchhoff from October 1871 until April 1873.

German physicist Felix Auerbach, author of the 1910 book Ectropy and the Physical Theory of Life, which introduced the notion of "ectropy" as a type of biological anti-entropy, studied under Kirchhoff at the University of Breslau, in Heidelberg.

German mathematical physicist Carl Neumann’s 1875 Lectures on the Mechanical Theory of Heat, which introduced the now-common notation, đ (d-hat), for the inexact differential, used methods on heat similar to Kirchhoff. [2]

In 1877, German physicist Max Planck, winner of the 1918 Nobel Prize in physics for his quantum theory work, studied under Kirchhoff in Berlin for one year. Planck's 1900 reformulation of Kirchhoff's equations on black body radiation started the quantum revolution.