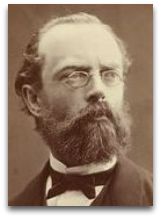 In thermodynamics, Gustav Zeuner (1828-1907) was a German physicist notable for a number of publications in the early developmental stages of thermodynamics, the first being his 1859 Fundamentals of the Mechanical Theory of Heat (Grundzüge der Mechanischen Wärmetheorie). [1] His central textbook, deriving from his 1859 paper and intended for his lectures at the Technical High School at Dresden, was the 1887 Technical Thermodynamics, which went through five editions, turning eventually into a two-volume set. [2]

Internal energy
In relation to German physicist Rudolf Clausius’ description of internal energy U of a body, in his 1879 Mechanical Theory of Heat, he has disagreement with Zeuner’s description and interpretation of a “quantity called U”, used by Zeuner, which in 1860 Zeuner calls “interior heat” of the body and in 1866 calls “internal work” of the body. [3]