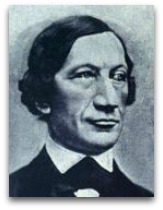 In existographies, Gustave Hirn (1815-1890) (CR:38) was a French physicist known, in human thermodynamics, for his 1856 experimental calculations of the mechanical equivalent of heat of humans. Hirn also authored the Experience on the Speed Limit of Gas (1839), the Thermal Effect of Work (1840), The Mechanical Theory of Heat (1862), and most notably, and most-importantly Philosophical Implications of Thermodynamics (1868), the first book in in the field of philosophical thermodynamics. [6] Hirn saw thermo-dynamics as the science of the forces (energies) that brought matter into motion; subsequently, his aims were to moralize power. [1] His work on heat theory led him to a generalized metaphysics based on the notion of force. [5]

Of note, the terms human thermodynamics and human thermo-dynamics were both coined in 1893 paper “The Scientific Work of Gustav Adolph Hirn” by English engineer Bryan Donkin. [4]

Mechanical equivalent of heat of humans
Hirn was the first to make a calculated value for the mechanical equivalent of heat for a man, an "animated motor", doing work in a sealed chamber, done probably similar to Antoine Lavoisier's combustion theory of animal heat experiments (c.1780) on humans.
To achieve this end, a man was placed in a hermetically closed chamber, and made to turn a wheel which could, at choice, revolve with or without doing work. The heat given out in the chamber was then ascertained by the ordinary calorimetric process. From these experiments, Hirn deduced a valuation of the mechanical equivalent of heat for animated motors; but the number which he obtained differed considerably from the standard obtained by James Joule through the standard physico-electric-mechanical methods. [2]
Education
Hirn, owing to his delicate health, was never allowed to attend school, and instead was home-schooled in the large cotton mill of his maternal grandfather M. Haussman, where his father was also a partner. His first studies were in the chemical laboratory of the Mill. In 1845, at the age of thirty, he was placed in charge of the steam engines working the Mill, which is about what time he is said to have begun his serious work, an office he remained at for nearly thirty-five years.