Overview
Following Thims' first lecture, in 2010, to UIC bioengineering thermodynamics students, the professor, Ali Mansoori, asked students to write out a short review or reaction response to the lecture, some of which are shown below:

The following frank and very ripe statement outlines a very tensional issue surrounding "belief systems", that between the olden religio-mythology belief system (mind, soul, morals), 60 percent of Americans, e.g., do not believe in evolution, and the new physical science based "moral symbols" belief system, as Goethe called them, that in belief in the first law (energy conservation) and second law (transformation content increase) of thermodynamics, and the reaction symbols of physical chemistry:

From the above clip, we get a glimpse into the insight of Goethe as part Casanova, part Newton, part Darwin, part Lavoisier, all framed around a Plato-Shakespeare idealism.

Likewise, prior to this there was French physicist Gustave Hirn's 1868 Philosophical Implications of Thermodynamics, the first book in in the field of philosophical thermodynamics; and prior to this German polymath Johann Goethe's 1808 physical chemistry based "moral symbols" theory; and prior to this British philosopher John Stewart and his 1789 "moral motion" theory, in which he did away with all of the mythological terms ‘life’, ‘death’, ‘god’, etc., and replaced these with modern physical sciences (astronomy, physics, and chemistry) based theory of ‘moral motion’, wherein man is viewed as an intelligent type of animate matter, made of particles (atoms), and that all that exists in the universe is matter and motion. The following are the 1998 polled views of America's so-called leading or "greater" scientists, the members of the National Academy of Sciences, on personal belief or disbelief on God and immortality: [2]


This 1998 data set can be combined with American psychologist James Leuba's 1916 and 1933 data sets to yield the following plot, which show, according to extrapolative estimates, that currently about 5 percent of leading scientists believe in the existence of God: [3] 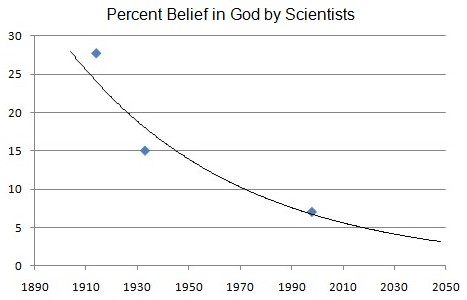 The following is the current global distribution in beliefs:

Of which 72 percent are Anunian theology or Ra theology (Ab-ra-ham-ic/B-ra-hma-ic) based:

The following is the millennium poll of belief the general public the world over: 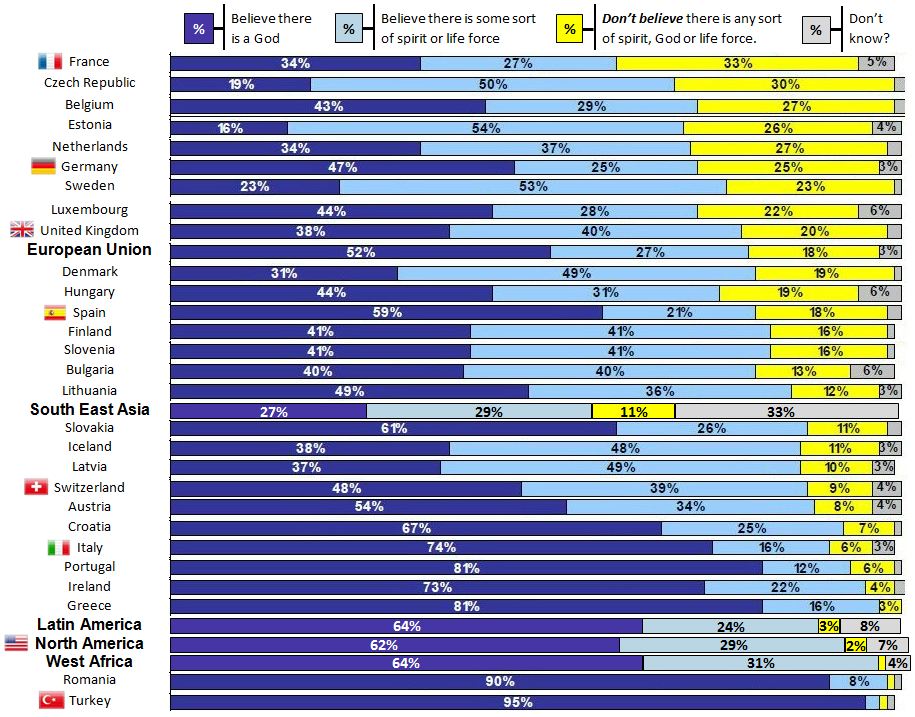 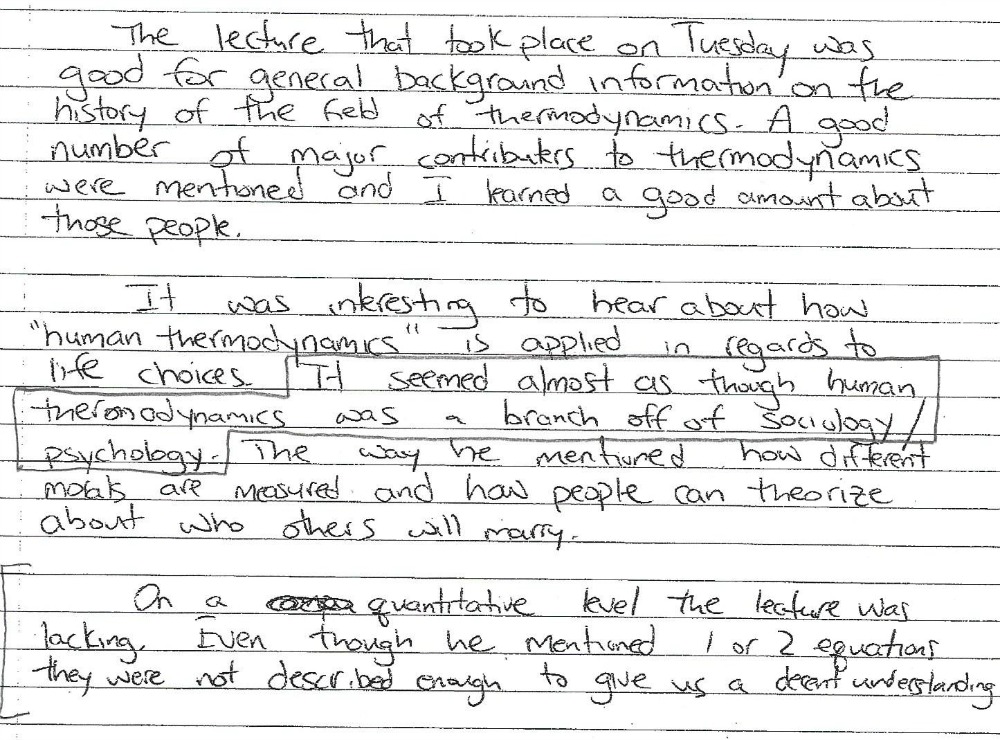 The following student was curious to learn that thermodynamics applied not only to sociology but also to business, the subfield of business thermodynamics, the recent 2009-launched Spanish-based consulting company "Social Thermodynamics Applied Research", headed by panish entrepreneur Gregory Botanes and physicist Alberto Hernando, being but one example: 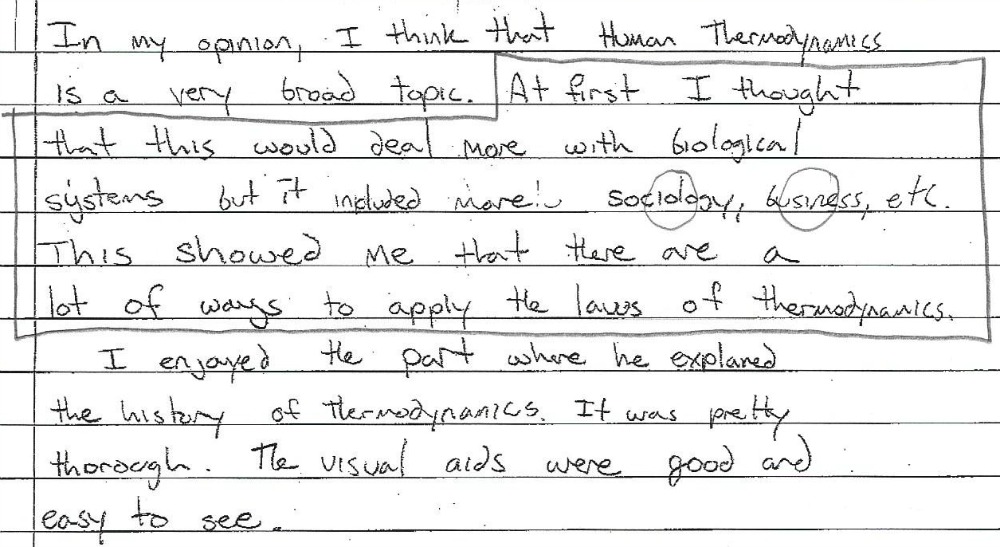 The following student was glad that Thims came to speak, in that it helped them see a new way of thinking about science and how it applied to areas, such as morality, relationships, and business, not generally considered scientific topics: 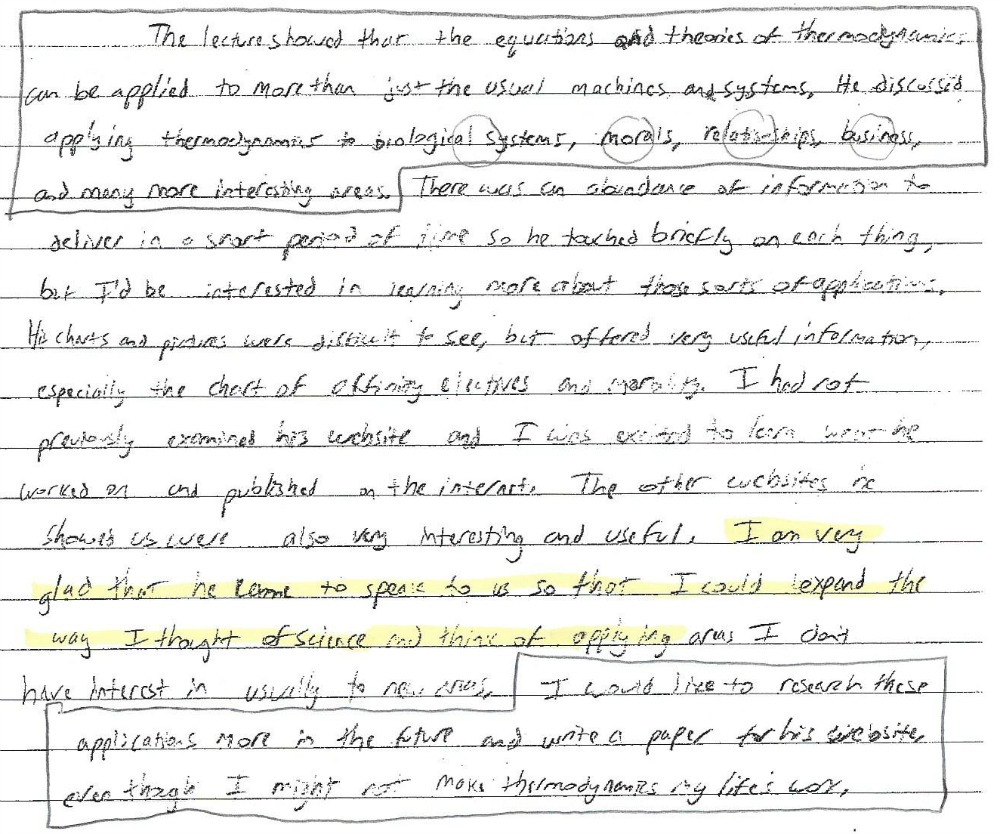 The following person learned that thermodynamically-speaking there is a link between the "decisions" (choices) a person makes and morality, whether the choice was natural or unnatural: 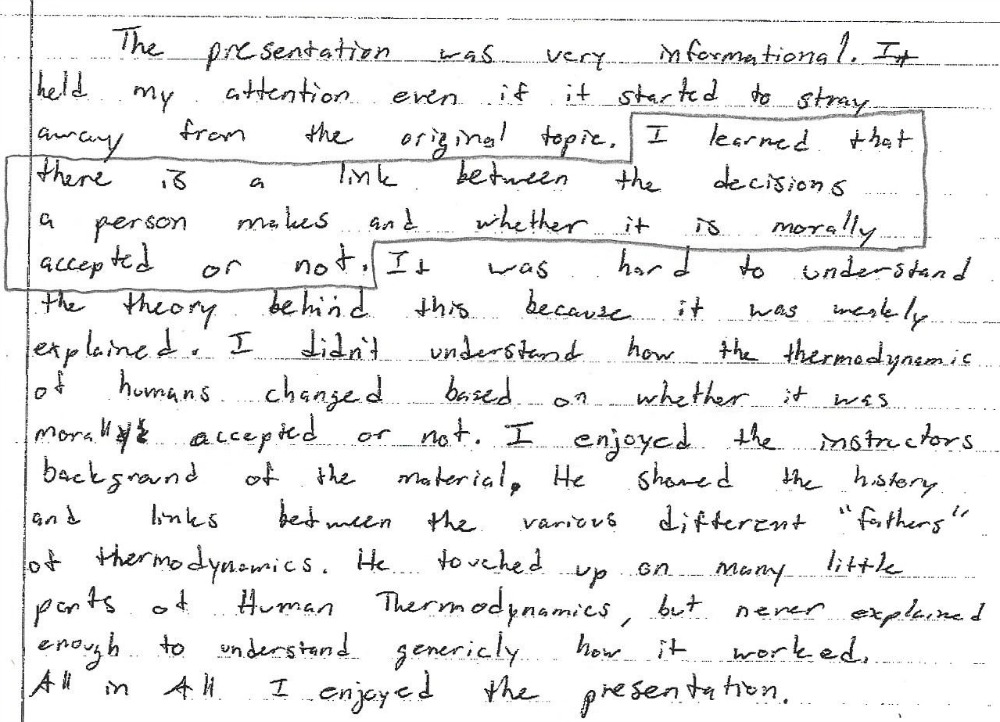 The following, from the 2012 lecture, are The last 15 minutes of the class were devoted to open discussion, questions, and or concerns. The following are a few Q&A examples that occurred in the discussion section:

Q: How can thermodynamics be applied to marketing, such as, for example, using affinity reaction diagrams:

if B were a given consumer, attached to a certain product A, who by the force of chemical affinity (or "will" as Henry Adams defines it) chooses to leave brand A and move to the use or attachment of brand C, be explained in terms of human thermodynamics?

which relates chemical affinity or the "will" or conscious choice of the person to the change in the Gibbs free energy in the system; and also directed him to the well-presented TED talk of English physicist and marketer Dan Cobley.

Q: How does human thermodynamics apply to the mind?

A: Thims explained how that was a large subject, the psychological thermodynamics of Sigmund Freud and Carl Jung, well-representative of this topic, being one classical approach; but explained that the best modern way to think about conscious choice is in terms of 1910 "chemical affinity = will" definition by Henry Adams:

“If thought is capable of being classified with electricity, or will with chemical affinity, as a mode of motion, it seems necessary to fall at once under the second law of thermodynamics. Of all possible theories, this is likely to prove the most fatal to professors of history.”

in coordination with the 1796 definition of chemical affinity by Johann Goethe as being derived from external forces or "external in origin":

“There are, by nature, stronger or weaker bonds between these components, and when they evidence themselves, they resemble attractions between human beings. This is why chemists speak of elective affinities [or human elective affinity], even though the forces that move mineral components [or human molecules] one way or another and create mineral structures are often purely external in origin, which by no means implies that we deny them the delicate portion of nature’s vital inspiration that is their due.”

Students were a bit puzzled by this; but to explain via way of example, Thims suggested that it is very likely that many of the students in the room, prior to making the "choice" to become an engineer, when they were children, likely "saw" (visual image transmitted by the electromagnetic force) an engineer personally or on TV or film and that this "image" implanted into their memory as a desire, or something along these lines, and hence influenced their educational and career path.

Q: One student noted how he was unaware that there was overlap between "engineering" (or thermodynamics) and his other passion of "sociology and economics"?

A: Thims explained that this indeed was a large field and that the best direction to go in this matter was to key word search in Hmolpedia for topics of interest and then dig into the respect works of each author to do further research; and to also see: sociological thermodynamics and economic thermodynamics as starting points.

Other questions were raised as well. The following, to update this question, is Thims' upcoming 2013 lecture at the University of Pitiesti, and their 5th annual econophysics and sociophysics conference: