Overview
In 1789, French philosopher Jean Sales, in his multi-volume opus The Philosophy of Nature: Treatise on Human Moral Nature, stated the following logic:

“This formula combines all compounds in a human into single abstract ‘molecule’. The stoichiometric approach considers whole organisms as if they were single abstract molecules. Organisms can be thought of as complex evolved chemical substances that interact with each other and the abiotic world in a way that resembles a complex, composite, chemical reaction. This formula for the ‘human molecule’ [allows one] to think about how every human represents the coming together of atoms in proportions that are, if not constant, at least bounded and obeying some rules.”

In 2002, American electrochemical engineer Libb Thims, independent of Sterner and Elser, derived the following 26-element molecular formula for a human:

about which he commented:

"By describing the existence of a human in this form we are by no means making attempts to degrade our existence, we are only trying to help elucidate our understanding of this existence.”

Thims eventually published his formula calculations online 2005, in his 2007 Human Chemistry, and, following discovery of the Sterner-Elser calculation, via the newly-launched Google Books term search, in his 2008 The Human Molecule, wherein a detailed history of the subject was presented (see: HMS pioneers).

These two formulas, the Sterner-Elser formula and the Thims formula, in recent years, have sense been slowly making it into books and textbooks, particularly in ecology and thermodynamics, namely those books as shown adjacent, as the "new" standard definition of a human.

In 2010, following the arrival of the defunct theory of life Thims began to connect "formula" to "free energy", visually, in terms of the model of synthesis in place of the now defunct model of birth, as shown below:

The above newly-forming usages are but the beginnings of "new scientific field", as Alec Groysman put it in 2011. Colloquially, the following poll results, collected online by English physicist James Eadon’s 2001-2008, shows that about 57 percent of people believe that they are molecules or specifically “giant molecules”. These statistics come from English physicist James Eadon’s 2001-2008: [1] 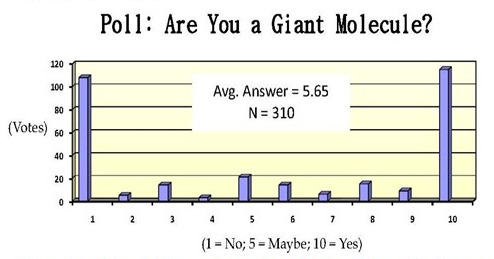 HMS pioneers
See the following human molecular science timeline for more on the ramifications and details of this new philosophical position: