In terminology, Ham, aka "Cham" (Schedel, 1493), is the Hebrew transliteration equivalent of the Egyptian name “keme’, meaning black soil, a reference to the black soil of the Nile River, deposited on the banks of the Nile, annually, by the 150-day flood, wherein soil, soot, particle matter, from the Ethiopian mountains, is carried down the rivers, in the flood waters, from the melting snow, which is left on the banks of the Nile, when the flood recedes.

Religio-mythology
In Judaism, the name Abraham, which translates as father (Ab) Ra of Egypt (Ham), or Ab-Ra-ham, the patriarch of the Judeo-Christian Islamic pantheon.

In c.500BC, the Jews or Is-Ra-El-ites, made a reformulated monotheistic religion out of the then extant version of Egyptian mythology.

In 1893, Perry Rufus, in his The Cȗshite: The Descendants of Ham, via citation to Christian Stock’s The Key of the Holy Tongue of the Old Testament (1717), explains the etymology of Ham as follows: [1] 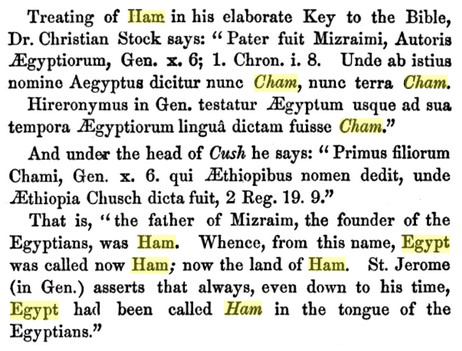 “Therefore, it would be found to be composed of the first two letters of the alphabet. This is precisely what is found in the Hebrew word for father: AB. Linking it with the Egyptian RA, the radiant solar deity, we have AB-RA-M, receiving later in its evolution the developed powers of godhood represented by the fifth Hebrew letter, he, and so becoming AB-RA-H-AM. And as Abram came out of the primordial empyreal fire, UR, it is hardly coincidental that even UR begins with that letter, U, which (with V) represents the downward line of descent, the turning upward and the return to the heights.”

“ ‘Ham’, the name of Noah’s second son, is pronounced ‘Chem’ in Hebrew, and he is depicted as the father of the Egyptian and African peoples. The name derives from the Egyptian word ‘Keme’, an ancient name for Egypt. It means ‘the black land’ and refers to the fertile black soil left behind when the annual Nile flood withdraws to its banks.”