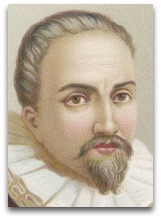 Overview
In early 1608, Lippershey, as the story goes, observed, as a spectacle maker, one of his customers looking through two eye pieces, one concave, one convex, one in front of the other, and therein gleaned the "idea" for putting two such lenses into a tube, so to see things far away.

On 2 Oct 1608, Lipperhey applied for a patent for a device, aka telescope, for “seeing things far away as if they were nearby”.

Quotes | On
The following are quotes on Lipperhey:

“In the year 1609 [sic], there appeared a genius or some other man, as yet unknown, of the race of Hollanders, who, in Middleburg in Zeeland, visited Johannes Lippersein, a man distinguished from others by his remarkable appearance, and a spectacle-maker. There is no other [spectacle-maker] in that city, and he ordered many lenses to be made, concave as well as convex. On the agreed day he returned, eager for the finished work, and as soon as he had them before him, raising two of them up, namely a concave and a convex one, he put the one and the other before his eye and slowly moved them to and fro, either to test the gathering point or the workmanship, and after that he left, having paid the maker. The artisan, by no means devoid of ingenuity, and curious about the novelty, began to do the same and to imitate the customer, and quickly his wit suggested that these lenses should be joined together in a tube. And as soon as he had completed one, he rushed to the court of Prince Maurice and showed hint the invention. The prince had one [or, had been acquainted with one] before, and lest it should be suspected that [the device] was of military value, and very necessary, had kept it a secret. But now that he found by chance that it had become known he disguised [his prior knowledge], rewarding the industry and good intentions of the artisan.”

“Genius, although often ascribed to a lone individual, is always a team effort. Socrates' ideas might have been lost without Plato's reconstruction of and addition to these ideas in the Dialogues. At the very least, geniuses build upon past work. For example, Galileo used Hans Lippershey’s invention, the telescope, to study the stars and support the Copernican view of a heliocentric solar system through the study of celestial motion. Even if they reject that work, they are still using it as a springboard for their new ideas.”