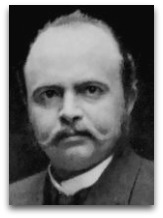 In science, Hans Driesch (1867-1941) was a German zoologist, a student of Ernst Haeckel, noted for his circa 1891 experiments on sea urchin embryos, about which he suspected that there must be a nonmaterial “life force” that supervised and regulated embryological development, after which he spent the remainder of his career working out a vitalism theory to explain his observations, a type of “scientific vitalism” as Jacques Monod classifies things. [1]

Entelechy | Thermodynamics
Driesch, supposedly, argued, at some point, that "entelechy", his brand of vitalism, may operate by suspending, as occasion requires, the operation of the second law of thermodynamics. [2] American physiologist Lawrence Henderson ripped on Driesch's argument as follows: [2]

“Driesch’s theory is ingenious, but I believe untenable. In fact it involves a reduction to the sphere of molecules of the old fallacy of Descartes. For to suspend the operation of the second law of thermodynamics would be precisely equivalent to an alteration, without the expenditure of energy, of the direction of motion of the particles of a material body. Under these conditions an object which had fallen to the ground might, by cooling itself, rise again into the air. Nothing could be more radically inconsistent with the fundamental principles of physical science, as now generally admitted, than this assumption or the theory which it is designed to support.”