In terminology, happiness is a term that characterizes a “state” of well-being, contentment, and or emotional and physical satiety. [1] From a human chemistry perspective, happiness can be defined as the reaction "state" in which a human molecule finds bonding or reaction satiety. [4] Recent studies, for instance, have found a correlation between happiness and the number of bonds in a person's social or friendship network. [5]

“Believe me, dear Sir: there is not in the British empire a man who more cordially loves a union with Great Britain than I do. But, by the God that made me, I will cease to exist before I yield to a connection on such terms as the British Parliament propose; and in this, I think I speak the sentiments of America.”

In Jun 1776, Jefferson began drafting Declaration of Independence, a formal announcement of the detachment of the thirteen newly independent American states from the British Empire, in which he originally penned the phrase “life, liberty, and property” as the three "unalienable rights" that humans need to exist. (Ѻ) He later edited, shown adjacent, it to read “life, liberty and the pursuit of happiness”, which has since become one of the most famous statements in American government documentation: 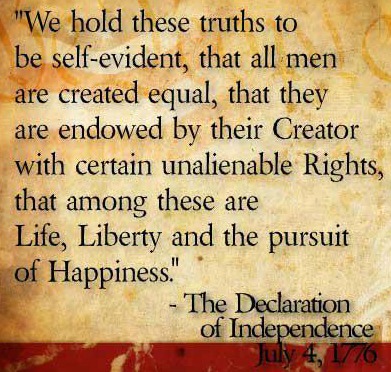 where G is Gluck (happiness), A is Arbeit (work or ‘energy expended in doing useful work’), W is Widerstand (energy dissipated in overcoming resistance), and k supposedly some type of proportionality constant. [8]

In 1987, American philosopher Elizabeth Porteus, daughter of the James Dole the “Pineapple King” of Hawaii, her My Twentieth Century Philosophy, discuss a connection between thermodynamics, happiness, and impulses.

Porteus outlined the view that since, according to generalized colloquial point of view, the second law of thermodynamics is a “law of disintegration”, meaning that “complicated arrangements always break down into less complicated ones”, a state of life happiness would occur when one aligns themselves with the force or “impulse of integration” in unison with the current of creation or growth of structure and form as seen in evolution. [2] By “creative”, Porteus refers to not only what is commonly considered creative such as "painting pictures, making music, writing books, making pottery or making any kind", but also to "any impulse to create a new integrated arrangement of the elements of reality." [3]

“We see many who are struggling against adversity who are happy, and more although abounding in wealth, who are wretched.”