In science, hard science, as compared to soft science, refers to subjects with hardened, universally-agreed upon, laws and principles.

Overview
The terms ‘hard’ and ‘soft’, and unwritten divisions in the sciences, frequently come to the fore when attempting to explain human-centric or the so-called life-centric subjects in terms of chemistry or physics.

Top sciences are considered ‘hard’ while those at the bottom are considered ‘soft’ and generally distinguished, in the former, by ability to measure tangible things precisely, e.g. that the speed of light in a vacuum is exactly 299,792,458 meters per second, as contrasted with the inability to measure indiscernible things precisely, in the latter, e.g. that biology is the study of the so-called term ‘life’, albeit a term that no one has ever been able to define precisely (and is coming to be seen as a defunct term), just as psychology, the study of the elusive ‘mind’, is considered to be a ‘very soft’ science, although some in the past have attempted to harden its foundation, such as Austrian psychologist Sigmund Freud and his 1895 ‘A Project for Scientific Psychology’, in which he postulated that in the future psychology will be framed in the exact sciences of chemistry and thermodynamics (specifically the conservation of energy). [2]

Often is the case that in debate on cherished conceptions such as free will, choice, life, among others, that the less cogently-minded person will incorrectly conclude with the view that the hard science will bend to the views of the soft science, whereas correctly a hard science, by definition, is inflexible, in this regard.

In 1964, John Platt gave the following popular inside summary on the underlying but often unstated demarcation on the comparison of the various so-called sciences: [3]

“Scientists these days tend to keep up a polite fiction that all science is equal. Except for the work of the misguided opponent whose arguments we happen to be refuting at the time, we speak as though every scientist's field and methods of study are as good as every other scientist's, and perhaps a little better. This keeps us all cordial when it comes to recommending each other for government grants.”

In 1993, Mae-Wan Ho gave the following statement on hard sciences, alluded to the premise that there is no "glass bead game", being a reference to Hermann Hesse's 1943 futuristic intellectual game, in hard science, i.e., that the rules do not change as the game goes along: [1] 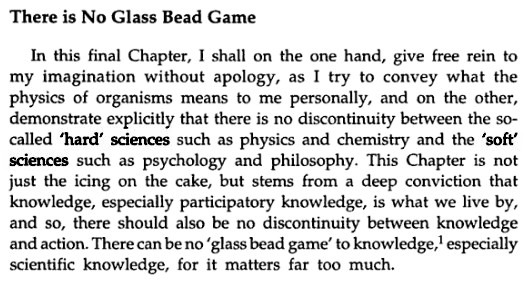 An example of the defectiveness of this polite view idea that “all sciences are equal”, is in debates on whether the concept of “life” is in fact a defunct theory, replaceable with the thermodynamic-view of animate physical-chemical mechanism. Indian chemical engineer DMR Sekhar, an example of a misguided opponent, and advocate of a "self-drive" theory of human motion, arguing that biology is more central than is thermodynamics, commented, in rebuttal to the response “according to you, we chemists, physicists, and engineers should bow down to the biologists and let them tell us how the universe runs”, that “science is science”. [6] This tension in the soft-hard debate is evidenced in American philosopher Massimo Pigliucci summary, in his 2010 chapter on hard vs soft science, that “the debate between scientists on what constitutes 'hard' (often equated with good, sound) and 'soft' (implicitly considered less good) science has not subsided since.” [4]

Hard
The "hardest" of all sciences is thermodynamics, a premise based on the logic that firstly the structure of classical thermodynamics (The Mechanical Theory of Heat, 1865) is framed in the two strongest laws in all of science (Einstein's conjecture) and secondly that all other sciences are said to be reducible to it (Eddington rule) or derived from it (e.g. quantum mechanics) or based on it (e.g. physical chemistry). The two central hard sciences are considered to be chemistry and physics. The grouping of all the hard sciences are sometimes classified under the label of "physical sciences". The central language of hard science is mathematics and is the language (Gibbs, c.1900) that explains reproducible universal experimental findings. This distinction is evidenced by the fact the hardest science major is generally agreed to be chemical engineering, the most unified subject of mathematics, chemistry, physics, and thermodynamics in structure and application. [7]

Pliable
There are some so-called scientific subjects in the middle ground between hard and soft, in the sense that they are bendable or open-ended, to a certain extent, and will conform to the hard science, if need be. An example is the subject of astronomy or cosmology, which is often labeled a hard science, albeit one with many unanswered and unexplained anomalies, such as the pioneer anomaly or the dark matter problem. It is found that astronomy will often "bend" to the laws of the hard science. When the "yet solidified" topic of black holes, for example, came to the fore in the 1970s, it was found that certain observations and models did not fit to the hard science of thermodynamics. Soon, however, the models were then corrected and the later discovery of Hawking radiation confirmed that the hard laws of thermodynamics were correct and thus the black hole models were forced into the "hardened mold" of thermodynamics. This is the same in the case of cross-breed subjects such as "biochemistry" (a blend of a soft and hard science), wherein, for instance, chemical mechanisms are re-worked until the fit the hardened mold of the governing equations of chemical thermodynamics.

Soft
The soft sciences include: economics, psychology, sociology, anthropology, history, political science, psychology, all generally labeled as the "social sciences" or humanities. The science of biology is a soft science, although some have argued that since theory of evolution, genetics, and DNA, that biology is becoming harder. The language of soft science tends to be the written language and the inability of a theory to move into the position of a law, an example being the "theory" of evolution, which is almost never referred to as the "law" of evolution, being the theory is not yet explained in the language of mathematics of the central hard sciences.