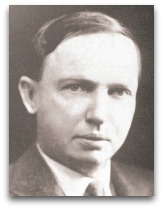 In existographies, Harlow Shapley (1885-1972) (IQ:#|#) (FA:171) was an American astronomer, dubbed the "modern Copernicus" by his colleagues, noted for his 1917 determination of the center of the galaxy, his 1920s deduction that the sun lies near the central plane of the Milky Way Galaxy and not at the center but some 30,000 light-years away, and for his 1953 “liquid water belt” theory, aka the habitable zone.
-
Influenced
A noted student of Shapley was Carl Sagan.
-
Atheism | Religion
Shapley, supposedly an auto-proclaimed “agnostic”, seems to have been a progressive atheist in many of his lectures and books; Craig Helge (2004) summarizes things as follows: [2]

“Hoyle's atheism and scientific attitude to nature and mind was to some extent shared by Harlow Shapley, the outstanding American astronomer and statesman of science. Intellectually, they were both descendants of the Victorian scientific naturalists. Shapley was not committed to any particular model of the expanding universe, but he did have strong opinions about the relationship between astronomy and religion. A confirmed agnostic, in the postwar period he often participated in science-religion discussions, and in 1960 he edited a major work on the subject—Science Ponders Religion.

In Shapley's view, the universe began with a collection of hydrogen atoms, and neither it nor life was in need of any divine intercession. ‘In the beginning was the Word, ... and I might venture that the word was hydrogen gas’, he said in a lecture of 1959. As to the question of where the hydrogen atoms came from, he dismissed it as metaphysics.

Insofar as religion deserved to survive, in Shapley's view it could only be in a modernized, secular version based on the insights of science. For this reason, he welcomed the pope's 1951 address as ‘an indication that church teaching can also evolve.’ But he considered traditional Christianity to be hopelessly fossilized and rather, looked ‘for religious beliefs that are founded on science, and that grow with science’. In a popular book of 1958, he asked: ‘May not science, broadly taken, be the fundamental cultural soil in which we plant and vitalize our religions? Need so many of them remain dated and non-rational?’ Such a belief—one would scarcely call it religion—he found in a kind of pantheism, although one in which …”

Quotes | By
The following are quotes by Shapley:

“It will indeed be interesting to see how many of the things which astronomers have learned during this last century will have to be unlearned.”

“In the beginning was the word, it has been piously recorded, and I might venture that modern astrophysics suggest that the word was hydrogen gas. In the very beginning, we say, were hydrogen atoms; of course there must have been something antecedent, but we are not wise enough to know what.”

“To place ourselves somewhere in the energy table has practically no meaning. We could compute the amount of energy represented by the masses of our bodies and compare it with the energies represented by the same masses of stars and atoms. But that comparison has already been done in effect by finding our placed in the organization of material systems.”

“The solar system is off center and consequently man is too.”

— Harlow Shapley (1969), Through Rugged Ways to the Stars