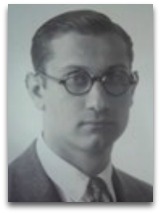 In existographies, Harold Blum (1899-1980) (IQ:#|#) (EvT:20|21+) (CR:55) was an American physicochemical physiologist, zoologist, and biologist (chnopsologist), generally know as one of the pioneers of the biologic (chnopsologic) study of light, noted for his 1934 to 1950 publications on evolutionary thermodynamics. [2]

Overview
In 1934, Blum, in his “A Consideration of Evolution from a Thermodynamic View-Point”, cites Lawrence Henderson (1913) and Gilbert Lewis (1923), to outline a coupling theory plus free energy decrease based theory of orthogenesis conceptualized evolution, in the form of what he refers to as "chemical peneplanation", i.e. an synonym the semi-modern term Gibbs landscapes, as seems to be the case. [6]

In 1950, Blum published his Time’s Arrow and Evolution, in which he aimed to reconcile the second law of thermodynamics with organic evolution. [7]

Blum, in his Time’s Arrow and Evolution, according to Steven Polgar (1960), supposedly, states that the second law does not apply to biochemical transformations. [1]

Blum argues that evolution did not begin with the formation of the first life, nor was the origin of life a precise event—rather, since the beginning of the universe, physical and chemical laws have inexorably channeled the course of change, so that possibilities were already limited and that life emerged. [3]

The anchor point for Blum’s work seems to have been English astronomer Arthur Eddington’s 1928 The Nature of the Physical World, wherein the term “time’s arrow” was originally coined, in connection to the second law.

His career in higher education included posts at the University of California, Temple University Skin and Cancer Hospital, Columbia University, Harvard Medical School, Princeton University, the Naval Medical Research Institute, the National Cancer Institute, and the State University of New York at Albany. Much of his work was focused on photobiology, such as his work on irradiation experiments on mice and cancer.

Quotes | On
The following are quotes on Blum:

“An ability to metabolize, involving some system of catalysts is another fundamental property which cannot be conceived of except in conjunction with a mechanism for converting free energy, and we are deeply indebted to Blum and his Time’s Arrow and Evolution (1951) for his masterly analysis of this extremely important aspect of this subject.”

Quotes | By
The following are quotes by Blum:

“Practically since its first definitive formulation by Darwin the concept of chance variation and natural selection has dominated the study of evolution, although frequent attempts have been made to replace or modify it. Probably most such attempts are provoked by a vaguely defined awareness of an insufficiency in the natural selection hypothesis, and the recognition of a directive factor in evolutionary processes which persists through successive generations. The latter concept which is commonly known as ‘orthogenesis’, is supported a by considerable amount of evidence (Leo Berg, 1926), but at present is not widely accepted among biologists. The general reason for abandoning or neglecting this concept has been the failure, thus far, to demonstrate the existence of the necessary directing factor outside of the theological doctrine; and one may suspect that fear of leaning too closely to such doctrine has caused most biologists to ‘shy off’ from orthogenesis. It will be the aim of the writer to indicate the actual existence of a directing factor in evolutionary processes, while at the same time avoiding all necessity of invoking theological concepts.”

— Harold Blum (1935), “A Consideration of Evolution from a Thermodynamic Viewpoint” [6]

“No matter how carefully we examine the energetics of living systems we find no evidence of defeat of thermodynamic principles.”