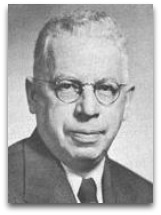 In existographies, Harold Davis (1892-1974) (CR:11) was an American mathematician noted, in economic thermodynamics, for his 1938 to 1941 publications on how some thermodynamics equations and economic equations show formal similarity.

Overview
In 1938, Davis published a joint review of the 1937 book by Georges Guillaume on thermodynamics and economics and of Jan Tinbergen’s An Econometric Approach to Business Cycle Problems in the Bulletin of the American Mathematical Society. [5]

In 1941, Davis digressed in discussions of a formal similarity between fundamental thermodynamic equations and some equations of economic models. [1] Davis considered the budget equations of macroanalysis and suggested that the utility of money represents “economic entropy”. [2]

In 1949, in commentary on Davis’ thermodynamic economics attempt, Dutch economist Johannes Lisman argued that none of the variables used in Davis' mathematical economic models seem to play the same role as entropy in thermodynamics. Based on Lisman's review, Davis theory seems to be a classic case of the use of employing thermodynamic isomorphisms. [4]

Education
Davis completed his AB in 1915 and Ll.D. in 1949 both at Colorado College, after which he completed an AM Harvard University in 1919 followed by a two-part PhD dissertation: I. An Existence Theorem for the Characteristic Numbers of a Certain Boundary Value Problem. II. An Extension of the Problem of the Elastic Bar, in 1926 at the University of Wisconsin-Madison. [3]

Quotes | Employed
The following are quotes employed by Davis:

“The writer can remember, as a student, meeting with the ‘entropy’ as a mysterious abstraction, enshrined in the writings of Lord Kelvin and others, but which no one dreamed of vulgarizing by the attachment of numerical values. Now every engineer's pocket-book contains tables of the entropy of different substances, and that most useful quantity is made available to the vulgar.”