In equations, heat = passion is a thermal word type of equivalency aiming to correlate heat of physics to the passions of emotions, or thereabouts, in the sense of the former being the quantifier of the latter.

Overview
In 1857, Albert Brisbane, in his “Theory of the Functions of the Human Passions” chapter, wherein he seems to give a cogent synopsis of Charles Fourier's theory, as concerns the passions, as follows:

“It may be laid down as a law, that forces can operate naturally and rightly only in mechanisms which are suited to them. This is as true of the passions as it is of all other forces in nature—of steam, for example, which cannot produce its legitimate effects in mechanics, except on condition that it operates in an engine perfectly fitted to it.”

In 2015, Libb Thims, in his "Zerotheism for Kids" lecture, section: introduction (Ѻ) (1 of 14), showed the Biddle version of the "heat = passion" equation, as connected to Boerhaave's law, one of the core laws of heat, in attempts to explain to the kids that "heat", which is related to the passions, in a realistic non-metaphorical way, has certain "rules" to its operation, which in no way depends on "god" (theism), or belief in the existence of god, because god is not a word found in the science of heat (thermodynamics): 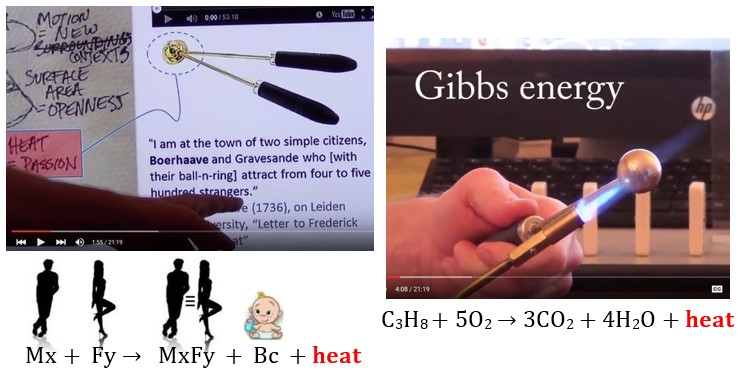 which is why it is important, if a child his to be taught a real world model of how the society works, to develop a foundational belief in zerotheism, in some sense, or else one will not be able to understand the operation of the passions, e.g. hot and cold reactions, in a modern way.

“For one heat, all know, doth drive out another; one passion doth expel another still.”

“Write while the heat is in you. The writer who postpones the recording of his thoughts uses an iron which has cooled to burn a hole with. He cannot inflame the minds of his audience.”

“If we equate love and passion to heat, it is often the case that on those first passionate encounters: heat runs or is transferred from the hotter to the colder body. Once the two bodies reach the same temperature, the dynamic energy exchange stops, the inevitable entropy takes its toll, and heat death threatens to smother the once vigorous flame.”