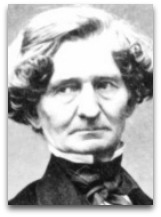 In human chemistry, Hector Berlioz (1803-1869) was a French composer noted for his 1854 "human molecule" terminology usage.

Overview
In 1854, Berloiz used the term ‘molécules humaines’ (human molecules), as found his book Evenings with the Orchestra, used to refer to the children of St. Paul’s Cathedral, and their shimmering outfits, as resembling a larger shimmering crystal. The specific passage is: [1]

“I was indeed in London in early June last year, when a fragment of the newspaper, fell by chance into my hands, told me that Anniversary meeting of the Charily children would take place in the church Saint Paul. I immediately began looking for a ticket, after many letters and approaches I finally get to the kindness of Mr. Gosse, the first organist of the cathedral. At ten o'clock in the morning, the crowd thronged the streets of the church, I succeeded, not without difficulty, to cross. Once in the organ loft for the singers of the chapel, men and children, numbering seventy, I received a bass part that I begged to sing with them, and it took me a surplice endorse, not to destroy, in my black suit, white suit harmony of the other singers. Thus disguised as a clergyman, I waited what was going to speak with a certain emotion wave, caused by what I saw. Nine amphitheaters nearly vertical, each of sixteen steps, stood in the center of the monument, under the dome and under the arch of the east front of the organ to receive the children. Six of the dome formed a sort of circus hexagon, open only to the east and west. This latest opening left an inclined plane, leading up to the top of the main gate, and already covered with a huge audience, who could thus, benches, even the most remote, to see and hear everything perfectly. To the left of the forum we occupied before the organ, a platform waiting seven or eight players of trumpets and timpani. On this platform, a large mirror was placed so as to reflect, for musicians, the chorus master of movement, scoring far away in a corner beneath the dome, overlooking the whole mass choir. This mirror was also used to guide the organist backs to the choir. Banners planted around the amphitheater which was almost the sixteenth tier capitals of the colonnade, indicating instead that would occupy the various schools, and bore the names of parishes or parts of London to which they belong.

Upon entry of groups of children, the compartments of amphitheaters, will populate successively from top to bottom, formed a singular look, recalling the spectacle in the microscopic world of the phenomenon of crystallization. The needles of this crystal of human molecules, still heading in the center of the circumference, were of two colors, hleufoncé in the habit of small boys on the steps from above, and the white robe and headdress girls occupying the lower ranks. In addition, the boys on their jackets, each plate of polished copper, the other a silver medal, their movements were flickering light reflected from the ornaments of metal, to produce the effect of a thousand sparks extinguishing and relighting every moment on the dark background of the table.

The appearance of the scaffolding covered by the girls was even more curious, green and pink ribbons that adorn the head and neck of these small white blank look exactly like this were part of the lecture to a mountain covered with snow, through which show themselves here and there the grass and flowers. Add the various nuances that melted away in the twilight of the incline where the audience sat, draped in the red chair of the Archbishop of Cantorhéry, benches ornate Lord Mayor and the English aristocracy on the square below the dome, then at the other end and the top golden pipes of the organ, just imagine this beautiful church of St. Paul, the largest in the world after St. Peter, while framing the and you will still only a very faint outline of this incomparable show. And everywhere an order, a meditation, serenity which doubled the magic. There is no staging, however admirable they may be, that can never approach this reality that I think I have seen in a dream by now.”