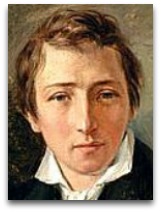 Religion | Unbelief
Heine born into a Jewish religion, but in 1825 converted to Christianity to secure his rights as a German citizen. [2] He is associated with a number of irreligion quotes:

“All our modern philosophers, though often perhaps unconsciously, see through the glasses which Spinoza ground.”

“He who fights with priests may make up his mind to have his poor good name torn and befouled by the most infamous lies and the most cutting slanders.”

“I consider it a degradation and a stain on my honor to submit to baptism in order to qualify myself for state employment in Prussia.”

“The weather-cǒck on the church spire, though made of iron, would soon be broken by the storm-wind if it did not understand the noble art of turning to every wind.”

“Wherever they burn books they will also, in the end, burn humans.”

“In the dark ages people are best guided by religion, as in a pitch-black night a blind man is the best guide; he knows the roads and paths better than a man who can see. When daylight comes, however, it is foolish to use blind, old men as guides.”

“Mine is a most peaceable disposition. My wishes are: a humble cottage with a thatched roof, but a good bed, good food, the freshest milk and butter, flowers before my window, and a few fine trees before my door; and if god wants to make my happiness complete, he will grant me the joy of seeing some six or seven of my enemies hanging from those trees.”

“Sleep is lovely, death is better still, not to have been born is of course the miracle.”

“We leave heaven to the angels and the sparrows.”

— Heinrich Heine (c.1835), Publication; cited by Sigmund Freud in The Future of an Illusion [6]

In 1927, Sigmund Freud, in his The Future of an Illusion, was citing the following statement by Heine, whom he refers to as a “fellow unbeliever”, as something he can say without regret.

Heine, according to Jennifer Hecht (2003), coined the term “unbeliever” (Unglaubensgenossen), in reference to Spinoza. [7]

Elective Affinities
In c.1810, Heine, according to Astrida Tantillo (2001), supposedly, attacked Johann Goethe and his 1809 physical chemistry novella Elective Affinities, saying that he was a corrupter of religion and that his novel overturns “everything holy”, is an attack against religion, morality, and the social forms. [1]


A better translation is as follows:

“Should, in fact, children with fashionable boarder-faces be here born into the world, I should much prefer to recognize in it a psychological phenomenon, and explain it by those material-mystical laws which Goethe has so beautifully developed in his Elective Affinities. The number of enigmatical appearances in nature which can be explained by these laws is truly astonishing.”
— Heinrich Heine (1826), Pictures of Travel, refection on shape of faces of children to different parents [1]

Heine here seems to be making a reference to Goethe's use of the maternal imagination theory in his novella.

In c.1820, Heine, in his discussion of Shakespeare’s Merchant of Venice, employed Goethe’s human elective affinity concept, albeit applied to nations; Michael Mack summarizes this as follows: [5]

“In his discussion of Shakespeare's Merchant of Venice, Heine delineated an "elective affinity" (Wahlverwandtschaft) between Jews and Germans: "It is indeed striking to witness a deep elective affinity between the two nations of morality, namely, between the Jews and the Germans." This notion of ‘wahlverwandtschaft’ has chemical associations as well: it denotes the mutual attraction of two chemical substances. Goethe in his famous—and in the nineteenth century rather infamous—novel Wahlverwandtschaften employed this scientific term in order to help explain the natural laws that underlie adulterous adventures. Significantly, Heine used this term—which, as a result of its Goethean usage, had rather immoral connotations for his contemporary readers—in order to describe the bond between two nations that supposedly epitomize morality per se. Goethe tried to describe the quasi-scientific lawful-ness that makes someone fall in love with another in violation of a given society's moral order. The scientific objectivity of the term ‘wahlverwandtschaft’ fulfills a similar function in Heine's work, where it serves to describe the rationality of the Jews as an objective fact. The Jews, Heine argued, resemble German idealists.”

Quotes | By
The following are noted quotes by Heine

“Matrimony is the high sea for which no compass has yet to be invented.”

“Mark this well, you proud men of action! you are, after all, nothing but unconscious instruments of the men of thought.”

“Great genius takes shape by contact with another great genius, but, less by assimilation than by friction.”