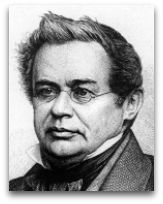 Lenz’s law
In 1833, Lenz, stimulated (Ѻ) by Michael Faraday's first paper on induction, began to conduct a number of general induction experiments; the result of which is arrival of the following statement, in short: [1]

“The induced electromotive force is in such a direction as to oppose, or tend to oppose, the change that produced it.”

A more detailed version, of this so-named “Lenz’s law”, from William Watson’s Textbook of Physics (1899), reads as follows: (Ѻ)

This phenomena, seemingly, is equivalent to an electromagnetic Le Chatelier’s principle; it thereby illustrates, supposedly, how electromagnetic circuits obey the third law of motion and the conservation of energy. [2]

In 2015, Libb Thims, in his “Zerotheism for Kids” lecture, did the Lenz’s law experiment to distinguish the gravitational force from the electromagnetic force, and how the former only effects a falling rock, whereas both forces effect and operate on humans, whether falling off a cliff or falling in love.

Other
In 1838, Lenz froze a drop of water using Jean Peltier’s thermoelectric method. [3]