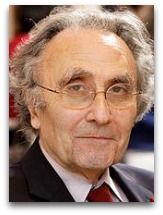 In hmolscience, Henri Atlan (1931-) is a French biophysicist, bioethicist, and philosopher, a Spinozan scholar, noted for his physics, chemistry, mechanism, reductionism, and historical approach philosophical problems in biology, such as his critique of the genetic paradigm—the tout genetique, or “everything is genetic” ideology—and to rethink more traditional and long-term problems of mechanism (since Rene Descartes), finalism (particularly in Immanuel Kant), and most-importantly vitalism (namely the question of reductionism of life to physics), the latter subject of which, such as found in his 1999 “Does Life Exist?”, he devotes significant effort to “putting few more nails” in the coffin, as he says, of Albert Szent-Gyorgyi’s 1940s “scandalous declaration” that life does not exist discussion. [1]

“Already at the beginning of the twentieth century, Albert Szent-Gyorgyi, who discovered vitamin C, scandalously declared that life does not exist. Following upon this ‘good news’ announced by Szent-Gyorgyi, my entire approach consists in putting a few more nails in the coffin—and in recognizing, in effect that life does not exist as such, at least not as an object of scientific investigation, since its mechanisms can be entirely reduced to chemical interactions.”

In 2002, Atlan, in his “Is Science Inhuman? An Essay on Free Necessity”, elaborated further on the problems involved in speaking about “life” in an essential fashion, e.g. claiming that the genome contains the “essence of life”, repeatedly quoted Szent-Gyorgyi’s claim that “life as such does not exist”, which he interprets to mean that: [3]

Meaning that, in the context of bioethics, as his collected works (2011) editors Stefanos Geroulanos and Todd Meyers summarize, “any thinking of the living cannot maintain its rigor if it postulates life as an essentialist notion” .

Education
In 1958, Atlan completed his MD in Paris, and in 1971 a PhD in science, at the University of Paris VII. (Ѻ) He then worked at the University of California, Berkeley, on aging and mutation. Sometime, herein, Atlan, notably, studied under Aharon Katchalsky. Presently, he is professor emeritus of biophysics and director of the Human Biology Research Center of the Hadassah University Hospital, Jerusalem. Atlan is fluent in English, Hebrew, and French.