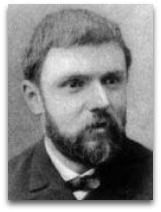 In existographies, Jules Henri Poincare (1854-1912) (IQ:180|#180) [RGM:476|1,500+] [LPKE:12] (GME:9) (GPE:63) [CR:76] was a French mathematical physicist noted his 1900 article “On the Three-body Problem and the Equations of Dynamics”, in which the recurrence theorem was established, a theorem used by German mathematician Ernst Zermelo in 1894 to seed a debate, involving those such as German physicist Max Planck and Austrian physicist Ludwig Boltzmann, on the likeliness of mechanical derivation of the second law of thermodynamics. [1]

Overview
Poincaré's 1892 Thermodynamics textbook represents the outlines of first semester lessons for college physics students. In his 1903 book Science and Hypothesis, chapter “Energy and Thermo-dynamics”, he discusses the compatibilities of the classical dynamics, such as the Hamilton’s principle, with the emerging first and second principles of thermodynamics, Poincaré asks: [3]

“Will the two principles of Mayer and Clausius assure to it foundations solid enough to last for some time?”

In the Brussels school of thermodynamics, Poincaré’s work had an influence on Belgian thermodynamicist Théophile de Donder, between 1911 and 1914.

In short, Poincaré 1900 article on the three body problem argued that three particles in a system can at various times reverse to their original starting positions. This logic, in turn, directly conflicted with German physicist Rudolf Clausius’ 1854 argument that in all real processes such a transformation would “not be reversible”, in that the forward and return forces involved would not compensate each other exactly. [4]

Poincare is said to have concluded, according to physical economics historian Philip Mirowski, that classical thermodynamics and Hamiltonian dynamics were incompatible, because no function of coordinates and momenta could have the properties of the Boltzmann entropy function. [6]

Economics
In circa 1905, Poincare wrote the following in a letter to Leon Walras: [7]

“Can satisfaction be measured? I may say that one satisfaction is greater than another, because I prefer one to the other; but I cannot say that one is two or three times greater than another … Satisfaction then is a magnitude, but not a measureable magnitude. Now is a magnitude that is not measureable therefore not amenable to mathematical theory? By no means. Temperature, for instance (at any rate before the term ‘absolute temperature’ had acquired a signification with the rise of thermodynamics), was a non-measureable magnitude. It was arbitrarily defined and measured by the expansion of mercury. It might quite as legitimately have been defined by the expansion of any other substance and measured by any function of that expansion, provided that it was a continually increasing function. Likewise, in the present case, provided that the function continually increases along with the satisfaction which it represents.”

Poincare, as commonly cited among IQ and genius discussions, so poorly on the Binet IQ, to note, that he was judged an imbecile (IQ=35). [8]

Education
Poincaré graduated from the École Polytechnique in circa 1876, then studied mathematics and engineering at the École des Mines, graduating with a degree in ordinary engineering in 1879, and completed his PhD in science with a dissertation “On the Properties of Functions defined by Differential Equations”, under the supervision of French mathematician Charles Hermite, at the University of Paris, finishing in circa 1879. He then lectured at Caan University for a term before becoming a professor at the University of Paris, in 1881, where he remained for the rest of his career, holding chairs in mechanics, mathematical physics, probability, celestial mechanics, and astronomy.