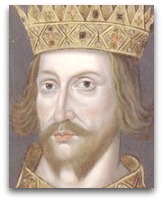 Overview
In c.1170, Henry II introduced the practice of “assizes”, an early form of trial by jury, wherein, twelve local men, with knowledge of a dispute, would be called into decide judgment, on matters such as who was the "rightful" owner or heir; this replaced the older method wherein a priest would be called in to bless a pond or river, and the accused thrown in, and if he or she floated, guild would be assume, per logic that the “blessed water” rejected them. [1]