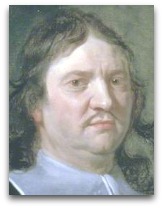 Overview
In c.1660, Oldenburg became the first secretary, along with John Wilkins, of the Royal Society, during which he was the liaison for all the correspondence of foreign scientists with the society.

In 1665, Oldenburg became the founding editor of the Philosophical Transactions of the Royal Society, reaming in that position until us passing, after which the journal was inactive for several years.

Papin
In 1675, Christiaan Huygens sent Denis Papin to London, with the following letter:

“Papin carries with him our book Nouvelles Experiences de Vuide (1674), and his wish is to ‘see what is being done in your country, even with the plan of establishing himself there if he can find the opportunity. I beg of you kindly to grant him your favour and protection, and that by your means he may be known by your illustrious friends, above all Mr. Boyle and Lord Brouncker.”

Oldenburg gave Papin a temporary job as a tutor. [2]

Quotes | On
The following are quotes on or related to Oldenburg:

“Hearing nothing from you by the two last posts concerning what I sent you about the high-suspended mercury [see: anomalous suspension]; I thought fit to send you this addition thereunto, to be inserted toward the close of it next before the last paragraph As to that ‘subtitle matter’ therefore of Huygens (as likewise that of Descartes) supposed to penetrate the glass, quicksilver, and other bodies: I do neither affirm, nor deny it, but only suspend my assent till it be proved; and if it be proved, I admit it. But admitting (without affirming) such to be; and admitting it also to be heavy or pressing downwards (for else it makes nothing to the present busyness:) I am not satisfied that this matter having free admission (though perhaps not equally free) as well above as below, should make this difference; since, whatever power it have, should equally operate (for ought I can see) whether the quicksilver be or be not cleansed of common air. And therefore the chief (if not the only) thing which doth determine whether it can or cannot be suspended at such a height, being this, whether it be or be not cleansed of common air: It seems to me most likely, that the cause of difference should be in that air, on whose absence or presence it doth depend, whether the quicksilver do stand or fall and what therein should make the difference I see nothing more likely than the spring of it. As to that of Brouncker (Ѻ), the case is somewhat different. For though he doth also attribute the effect to somewhat in the external air, which may give a further pressure than what is commonly observed in the Torricellian experiment: yet I do not remember that he doth expressly say whether it do or do not penetrate the glass. And I think we may more easily give an account of it (and perhaps more suitable to his sense) if we say, it do not. Which I should thus do.”

Quotes | By
The following are quotes by Oldenburg:

“Modern philosophers, to avoid circumlocutions, call that instrument, wherein a cylinder of quicksilver, of between 28 to 32 inches in altitude, is kept suspended after the manner of the Torricellian experiment, a ‘barometer’ or ‘baroscope’.”