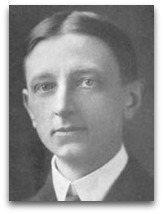 In thermodynamics, Henry Bumstead (1870-1920) was an American physicist notable for being a graduate student of Willard Gibbs and for having produced a 27-page detailed review of Henry Adams’ 1909 "The Rule of Phase Applied to History", which attempted to apply Gibbs’ phase rule to the modelling of the phases of human history in a physical-chemical sense of people viewed as human molecules; after which, during the next year or two, Adams revised his essay to meet Bumstead’s specific criticisms. [1]

Adams | Gibbs
In circa 1908, American physical humanities historian Henry Adams, while in Paris, began reading physical chemistry books and its seems chemical thermodynamics treatises (or at least outlines) of Willard Gibbs. Adams, for example, reporting that: [3]

This is hilarious to the last, indeed, something you just can't make.

Shortly thereafter, sometime in late 1908, on, before, or thereafter Nov 27, the date when he executed his last will and testament, Adams began probing (sending notes) to John Franklin Jameson, director of the historical department of the Carnegie Institution, asking for some type of physical chemistry trained tutor and or proofreader:

“On the physico-chemical law of development and dynamics, our society has reached what is called the critical point where it is near a new phase or equilibrium.”

“I’m looking for a ‘young and innocent physico-chemist who wants to earn a few dollars by teaching an idiot what is the first element of theory and expression in physics.”

“My essay ‘The Rule of Phase [Applied to History]’ is a ‘mere intellectual plaything, like a puzzle’ [to Brooks]. I am interested in getting it into the hands of a ‘scientific, physico-chemical proofreader’ and I am willing to pay ‘liberally for the job’ [to Jameson].”

Adams eventually penned out an essay of his ideas entitled “The Rule of Phase Applied to History”, which he sent to Jameson for publication in The American Historical Review. Jameson, although he turned the essay for publication, continued his search in helping Adams find a Reader. This effort resulted in a typescript of the manuscript arriving into the hands of Henry Bumstead of Yale, who had recently finished co-editing the posthumous edition of Gibbs’ scientific papers in 1906. Bumstead agreed to the job and, by Jan 1910, had produced a ‘meticulously detailed critique’ of Adams’ essay. [3]

Education
As a child Bumstead was found to have a prodigious memory; at age three he was fluent in German and English. [6]

In 1887, Bumstead went to Johns Hopkins University, initially as a student in a pre-medical program (his father was a physician), where he studied mathematics with Fabian Franklin, and physics with Henry Rowland. In 1891, he obtained a BS in physics, and continued at Johns Hopkins as an assistant in the physics laboratory and a graduate student. He studied thermodynamics, electrostatics, and the electromagnetic theory of light.

Notebooks found among his effects show that he took a course in thermodynamics under Rowland in 1891 which included, in addition to the classical thermodynamics, a considerable amount of the material contained in Gibbs' great work On the Equilibrium of Heterogeneous Substances.
The following year, Bumstead attended Rowland's lectures on “Electrostatics and on the Electromagnetic Theory of Light.” [6]

In 1893, Bumstead became a student of Willard Gibbs, learning vector analysis and continuing the study of thermodynamics and the electromagnetic theory of light; he als became an instructor at the Sheffield Scientific School of Yale University, and began working with Charles Hastings. Bumstead’s existographer Leigh Page (1929) reports the following: [6]

“In 1893 Bumstead was brought to Yale by Professor Charles S. Hastings as an instructor in the Sheffield Scientific School. Undoubtedly the prospect of coming into personal contact with Gibbs had much to do with his decision to make the move. What time he could spare from his teaching duties he devoted to continuing his study of physics in the Yale Graduate School. He took courses with Gibbs in Vector Analysis, Multiple Alge­bra, Thermodynamics, and Electromagnetic Theory of Light, his notes on the last two courses being extant and in the possession of the writer. Gibbs' high opinion of his brilliant student is evi­denced by the notation "excellent" in the reports submitted to the graduate school at the termination of each of these courses. Evidently Bumstead's keenness of perception was thoroughly appreciated by Gibbs, for the latter once remarked to one of his colleagues "Some things come easier to Bumstead than to most men.”

In 1897, he completed his PhD with a thesis on “A Comparison of Electrodynamic Theories”, after which in 1900 he became an assistant professor. In 1905, Bumstead spent a sabbatical year at the Cavendish Laboratory, performing experiments, suggested by J. J. Thomson, on the effect of X-rays (then called Röntgen rays) when applied to lead and zinc, finding that "twice as much heat is produced in lead compared to zinc". When Arthur Williams Wright retired in 1906, Bumstead became professor of physics at Yale College and Director of the Sloan Physics Laboratory.

Gibbs
The following is a noted quote by Bumstead, from his 1903 obituary / biographical article “Josiah Willard Gibbs”, on the extreme difficultly involved in the comprehension of Gibbs' famous 1876 On the Equilibrium of Heterogeneous Substances: [2]

“It was a number of years before its value was generally known; this delay was due largely to the fact that its mathematical form and rigorous deductive processes make it difficulty reading for anyone, and especially so for students of experimental chemistry whom it concerns most.”