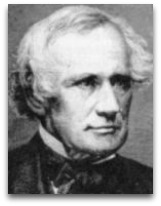 In existographies, Henry Carey (1793-1879) (IQ:#|#) (SN:10) (CR:105) was an American physical science applied sociologist and economist, known as the ‘Newton of social science’ (see: social Newton), noted for his three-volume 1858 The Principles of Social Science, wherein he uses of physics and chemistry in sociological theory, e.g. his ‘law of molecular gravitation’ which he says accounts the aggregation of people in larger cities, among numerous other theories. [1]

Overview
The following is the gist of Carey's position on what constitutes the "subject of social science", as he sees things:

“The laws which govern matter in all its forms, whether that of coal, clay, iron, pebble stones, trees, oxen, horses, or men, are the same; man is the molecule of society; and social interaction operates under the great law of molecular gravitation.”

Austrian social economist Werner Stark (1962) interprets Carey's "man is the molecule of society" definition to mean that people are ‘human molecules’, which Stark defines as "power-points" which push and pull until a certain equilibrium is reached. [6]

Social gravitation
Carey’s principle of social gravitation or ‘law of molecular gravitation’, supposedly having been influenced by the earlier 1841 work of Friedrich List, expounding on the view that 'human molecules' tend to attract into the formation of large cities, is given as such:

“Gravitation is here, as everywhere else in the material world, in the direct ratio of mass, and in the inverse one of the distance. The greater the number collected in a give space, the greater is the attractive force there exerted, as is seen to have been the case with the great cities of the ancient world, Niniveh and Babylon, Athens and Rome, and is now seen in regard to Paris and London, Vienna and Naples, Philadelphia, New York, and Boston.”

Gravity, according to Carey, creates a foci of human aggregation.

Affinity
Carey, in his chapter VIII, ‘On the Formation of Society’, seems to have outlined some excellent Goethe-style ideas on how chemical affinity relates to movement of humans. He states:

“In the inorganic world we find the power of combination growing with the increase of differences. Place a thousand atoms of oxygen in a receiver, and they will remain motionless; but introduce a single atom of carbon, and excite their affinities for each other, and at once motion will be produced. Such being the case in regard to all other matter, it must be so in regard to those combinations in which man is concerned, indicated by the term society.”

This is a near-classic quotation. Very excellent. In a modern sense, this is really good theory, with deep insight, very rare to come by.

Social heat
In introducing the topic of social heat between reactive human molecules in society, according to Stark, Carey states:

“In the inorganic world, every act of combination is an act of motion. So it is in the social one. If it is true that there is but one system of laws for the government of all matter, then those which govern the movements of the various inorganic bodies should be the same with those by which is regulated the motion of society; and that such is the case can readily be shown.”

Then, in what seems to be a citation of Berthelot-Thomsen principle, that the ‘heat of a reaction was the true measure of affinity’, Carey states:

“To motion there must be heat, and the greater the latter, the more rapid will be the former.”

This means, according to the 1962 opinion of Stark that:

“In the physical universe, heat is engendered by friction. Consequently the case must be the same in the social world. The ‘particles’ must rub together here, as they do there. The rubbing of the human molecules, which produces warmth, light and forward movement, is the interchange of goods, services, and ideas.”

“In the material world, motion among atoms of matter is a consequence of physical heat. In the moral world, motion is a consequence of social heat—motion, consisting in an ‘exchange of relations’ resulting from the existence of those differences that develop social life. Motion is greatest in those communities in which agriculture, manufactures, and commerce are happily combined. That such is the fact will be obvious to all who see how rapid is the spread of ideas in those countries in which agriculture, manufactures, and commerce are combined, compared with that observed in those which are purely agricultural. In the one there is great heat and corresponding motion, and the more motion, the greater is the force. In the other there is little heat, but little motion, and very little force.”

Most of these quoted views of Carey still need to be tracked down, but they may be in his 1859 three volume The Principles of Social Science, in which he is said to have gathered the fruits of his lifelong labors.

Education
Carey was the son of Irish-born American social commentator, political economist, and publisher Mathew Carey (1760-1839), publishing associate of Benjamin Franklin, political associate of John Adams, and author of Essays on Political Economy; or, The Most Certain Means of Promoting the Wealth, Power, Resources, and Happiness of Nations, Applied Particularly to the United States (1822). In 1825, Carey senior retired and left the publishing business to his son, Henry Carey, and his son-in-law Isaac Lea, during which time they published works such as: The Encyclopedia American and A Dictionary of German Lexicon. Henry Carey retired from the publishing business in 1838, while publishing his 4-volume Principles of Political Economy. Carey, into the 1850s, is described, by Trevor Barnes, as a retired autodidact. [7]

Quotes | On
The following are quotes on Carey:

“In 1858-59, Carey gathered the fruits of his lifelong labors into The Principles of Social Science, in three volumes. This work is a most comprehensive as well as mature exposition of his views. In it Carey sought to show that there exists, independently of human wills, a natural system of economic laws, which is essentially beneficent, and of which the increasing prosperity of the whole community, and especially of the working classes, is the spontaneous result—capable of being defeated only by the ignorance or perversity of man resisting or impeding its action. He rejected the Malthusian doctrine of population, maintaining that numbers regulate themselves sufficiently in every well-governed society, and that their pressure on subsistence characterizes the lower, not the more advanced, stages of civilization. He denied the universal truth, for all stages of cultivation, of the law of diminishing returns from land.”

“Carey’s Principles of Social Science is one of the most conspicuous attempts in the second half of the nineteenth century at a physical interpretation of social phenomena.”

“Man, the molecule of society, is the subject of social science.”

“The laws which govern matter in all its forms, whether that of coal, clay, iron, pebble stones, trees, oxen, horses, or men, are the same.”

“The great law of molecular gravitation … man tends of necessity to gravitate toward his fellow man [sic] … Gravitation is here, as everywhere else in the material world, in the direct ratio of the mass and in the inverse one of the distance.”