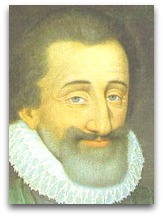 Overview
In 1598, Henry IV signed into order the Edict of Nantes, which granted the Calvinist Protestants of France substantial rights in the nation, thereby promoting civil unity.

In 1625 to 1643, Richelieu was the de facto governor of France, during which time he embedded the world’s first operational secular scheme of government.

Quotes | On
The following are quotes on Henry IV:

“There now took place what we must be content to call an accident, but which was the beginning of a most important change. In the year 1589, Henry IV ascended the throne of France. This great prince, who was far superior to any of the French sovereigns of the sixteenth century, made small account of those theological disputes which his predecessors had thought to be of paramount importance. The powerful intellect of Henry IV had not the slightest sympathy. To suit the shifting politics of his age, he had already changed his religion twice; and he did not hesitate to change it a third time, when he found that by doing so he could ensure tranquility to his country. Only five years after he had solemnly abjured Protestantism, he published the celebrated edict of Nantes, by which, for the first time, a Catholic government granted to heretics a fair share of civil and religious rights. This was, unquestionably, the most important event that had yet occurred in the history of French civilization. If it is considered by itself, it is merely an evidence of the enlightened principles of the king; but when we look at its general success, and at the cessation of religious war which followed it, we cannot fail to perceive that it was part of a vast movement, in which the people themselves participated.”