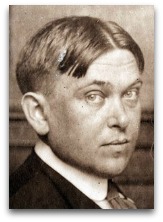 In existographies, Henry Mencken (1880-1956) (CR:8) (HD:53) (FA:82) (RMS:72) was an American, German-fluent, journalist, a self-professed agnostic, atheism-leaning scholar, coiner of the term "Bible Belt" (Hecht, 2003), noted for his satirical reporting in the 1925 Scopes trial (see: science vs religion legal cases), on legality of teaching evolution in high school, which he dubbed the “Monkey Trial”. [5]

In 1920, Mencken published (Ѻ) an English translation of Nietzsche’s The Anti-Christ (1888), using two earlier translations, one by Thomas Common, and another by Anthony M. Ludovici, as references. [4] Noted quotes from this work are as follows:

“No man of sound information, at the time [1885] Nietzsche planned The Antichrist, actually believed that the world was created in seven days, or that its fauna was once overwhelmed by a flood as a penalty for the sins of man, or that Noah saved the boa constrictor, the prairie dog and the pediculus capitis [head lice] by taking a pair of each into the ark, or that Lot's wife was turned into a pillar of salt, or that a fragment of the ‘true cross’ could cure hydrophobia. Such notions, still almost universally prevalent in Christendom a century before, were now confined to the great body of ignorant and credulous men—that is, to ninety-five or ninety-six percent. of the race.”

Scopes Trial
In 1925, Mencken entered the arena of the “Scopes trial” as the reporter on the side of Clarence Darrow, evolution, and atheism; the following is a noted film remake quote:

“I know that the sunrise is an optical illusion. My teacher told me so.”

— Henry Mencken (1925), attributed; said by E.K. Hornbeck (Gene Kelly), of the Baltimore Herald, patterned after Mencken (Ѻ), in: Inherent in the Wind (1960), the film remake of the Scopes Monkey Trail, in response to query as to "why he bothers" (Ѻ), him and his newspaper, dealing with this religious legal trickery

“The cosmogony of the Jews, as recorded in Genesis, was mainly borrowed from the Babylonians. According to A. H. Sayce, the creation myth that it embodies arose at Eridu, a town on the Persian Gulf. Here, he says in the Hastings' Encyclopedia of Religion and Ethics, ‘the land was constantly growing through disposition of silt, and the belief consequently arose that the earth had originated in the same way. The water of the great deep accordingly came to be regarded as the primordial element out of which the universe was generated. The deep was identified with the Persian Gulf, which was conceived as encircling the earth’.”

Other quotes from this work are as follows:

“Religion is so absurd that it comes close to imbecility.”

Other
In 1945, Mencken, in an article of The American Mercury, supposedly, used term bio-psycho-dynamics to refer to a person as a type of storage battery. [1]

“It is now quite lawful for a Catholic woman to avoid pregnancy by a resort to mathematics, though she is still forbidden to resort to physics and chemistry.”

“One horse-laugh is worth ten thousand syllogisms.”

“Well, I tell you, if I have been wrong in my agnosticism, when I die I’ll walk up to god in a manly way and say, sir, I made an honest mistake.”

“The scientist who yields anything to theology, however slight, is yielding to ignorance and false pretenses, and as certainly as if he granted that a horse-hair put into a bottle of water will turn into a snake.”

“We must respect the other fellow’s religion, but only to the extent that we respect his theory that his wife is beautiful and his children are smart.”