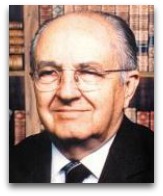 In hmolscience, Henry Morris (1918-2006) was an American civil engineer and hydraulics engineer notable, in religious thermodynamics, for being one of the first to adamantly invoke the laws of thermodynamics, particularly the second law, to argue that evolution is impossible. [1]

Thermodynamics | Creationism
In 1946 Morris wrote his first evolution debunking themed book entitled That You Might Believe, which was enlarged and republished in 1951 as The Bible and Modern Science. In the years to follow, he seems to have fortified his stance by incorporating the classic second law argument into his arguments in support of creationism. In his 1974 book The Troubled Waters of Evolution, for instance, Morris states: [2]

“There is firm evidence that evolution never could take place. The law of increasing entropy results in an impenetrable barrier which no evolution mechanism yet suggested has ever been able to overcome. Evolution and entropy are opposing and mutually exclusive concepts. If the entropy principle is really a universal law, then evolution must be impossible.”

Similarly, in 1985 he stated “the second law of thermodynamics says that everything tends towards disorder, making evolutionary development (ordering) impossible.”

In 1996, in attempting to use thermodynamics to argue that God created the universe, Morris stated: [3]

“The second law (the law of decreasing available energy, as the universe heads downward toward an eventual ‘heat death’ with the sun and stars all burned out) tells us that there must have been a primeval creation, or else the universe would already be ‘dead’! The first law (law of energy conservation) tells us that no energy is now being created, so the universe could not have created itself. The only scientific conclusion is that ‘in the beginning God created the heaven and the earth’ (Gen. 1:1).”

In short, Morris is attempting to use thermodynamics to justify the Heliopolis creation myth as described in Ra theology, the precursor to Genesis version of creation myth.