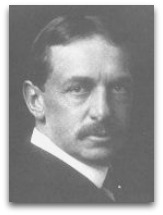 In existographies, Henry Osborn (1857-1935) (CR:9) was an American anatomist, zoologist, and paleontologist, noted for

Overview
In 1916, Osborn, in his The Origin of Life: On the Theory of Action, Reaction and Interaction of Energy, presented a fairly modern view of evolution based on mechanism and thermodynamics. [1] In summary of his work, Osborn states: [2]

“The first half of the volume is devoted to the capture, storage, release, and reproduction of energy in its simplest and most elementary living phases; the second half is devoted to the evolution of matter and form in plants and animals, also interpreted largely in terms of energy and mechanics.”

Osborn’s Origin of Life is a product of a lecture series on cosmic-evolution, specifically a mid-way lecture on the topic of “initial steps toward an energy conception of evolution and heredity”; the resultant unified book being completed on the suggestion of Osborn’s friend American astronomer George Hale. [2]

Religion
Osborn, according to Sunand Joshi (2014), is classified, similar to Robert Millikan, as someone attempting to reconcile religion and science. [6]

Thermodynamics
Osborn states that his learning of physics is attributed to the instructions of his Columbia University colleague Serbian-born American physical chemist Michael Pubin, notable for having obtained his PhD under German physicist Hermann Helmholtz at the Berlin school of thermodynamics, who instructed Osborn “on the fundamental relation of Newton’s laws of motion to the modern laws of heat and energy (thermodynamics), [clarifying] the laws of action, reaction, and interaction from a physical standpoint.” [4] In this aim, Osborn utilizes the word “thermodynamics” many times, but fails to mention the words “entropy” or "Clausius" a sure sign of a novice. [1]

As to his understanding of the physiochemical actions and reactions of living organisms, i.e. dynamics, Osborn states that he drew heavily from German-born American physiologist Jacques Loeb’s book Dynamics of Living Matter. [5]

Difficulties on theory
Osborn’s general work seems to be very cogent. A point of difficulty is that Osborn crutches on the concept of “living energy” and what he calls the phenomena of living matter, defined as the utilization of the energy concept “forward into matter and form” in the study of the assent of evolutionary structure. This idea postulate, superficially, seems reasonable, but upon further thought it falls in with the defunct theory of vitalism. Osborn, for instance, correctly explains fitness of the early life-like structures: [2]

“The earliest fitness we discover in the bacteria or monad is the fitness of grouping and organizing different kinds of energy—the energy of molecules, of atoms, of electrons as displayed in the twenty-six or more chemical elements which enter into life.”

in that modern functional counts of active elements in human beings is found to be 26, but when this logic is taken on face value, in the sense that a structure comprised of elements is a molecule, the postulate of a molecule, such as H2, H20, or DNA, etc., as viewed on molecular evolution tables, being alive becomes illogical. [3]

“We may accept the hypothesis that in the earliest periods of organization of living matter there was a combination of ten elements essential for life. Of the four most important elements were derived from their primary combinations of water, bound nitrogen (volcanic eruptions), and carbon dioxide of the atmosphere.”

Further reading
● Osborn, Henry F. (1895). “The Hereditary Mechanism and the Search for the Unknown Factors of Evolution”. The American Naturalist (pgs. 418-39), May.