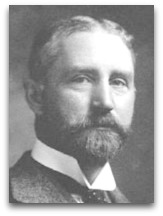 In human chemistry, Henry Pritchett (1857-1939) was an American astronomer and college president (MIT, 1900-1907) noted for his 1906 vicarious call for the development of a science able to predict or speculate on human chemical reactions (see: theory) so as to facilitate the counceled guidance and or placement of students, according to his or her own unique nature, in college, particularly in regards to going to a large or small college, and comments that he had conducted an experiment along these lines with his own sons.

Overview
In 1906, at the 21st annual meeting of the New England Association of Colleges and Preparatory Schools, toward the end of a two-hour topic focus discussion on the subject of “Small vs. Large Colleges”—stemming back to Greek philosopher Plato’s dialogue on the question of how large a state should be, wherein Socrates responded with “as large as is consistent with unity” (see also: Dunbar number)—Pritchett told that he had conducted an experiment of sorts with his own two sons, sending one to a small college, the other to a large college, during the course of which he queried each as to social network count and also speculated on the need or desire to have a human chemical reaction technology able to predict the suitableness of each prospective college student, in regards to course towards large or small colleges, based on his or her individual nature. The full statement of which, after introduction by association president William DeWitt Hyde, is as follows: [1]

“President Pritchett has assumed a fatherly relation over all institutions, large and small, and from his point of observation we shall be glad to have some contribution to this discussion.”

President Henry S. Pritchett, of the Massachusetts Institute of Technology:

“Mr. President, I had meant to be only a listener here, and I have been much interested in the discussion of this matter which has been had so far. My own correspondence with educational institutions for the last six months has led me to understand that each American college is a peculiar institution. The president of each one of these institutions has carefully explained to me by letter that this was true. As long as this is true, it naturally follows that wherever a man may go he will find a certain environment which has its peculiar advantages and its peculiar opportunities. In the Institute of Technology the matter of numbers does not enter in the same way in which it enters in the ordinary large college. Although it has some 1,500 students, what is called the entering class is thrown much together. After the men begin to differentiate, they separate into 13 courses, so that the men who may take, let us say, marine engineering, are thrown naturally together. In this case we have here a natural grouping of students.

Since you have been so good, however, as to refer to my fatherly relation, I may say that I have as a father tried two practical experiments in this way, which is one of the attractions of being a father. I sent one boy to a small college, one of the old colleges, Hamilton, which I think might well be selected as a type of a small college. I sent a second boy, who was preparing to be an engineer, to take his college course at Harvard.”

In modern human chemical reaction theory formulation, the following might well depict the mechanism of these two separate reaction experiments:

where SA and SB are sons A and B, CS and CL are the small college (Hamilton) and large college (Harvard), SA≡CS and SB≡CL are the encounter complexes (see: collision theory), one might say, and SAm and SBm are the modified "adult" sons after finishing college, respectively. Pritchett continues:

“I was somewhat interested to see how this matter of social relation worked itself out. The result of this practical experiment was this: The boy who went to a small college joined a fraternity, in which he found 12 or 15 men who became his close intimates, and with whom almost all his friendships were contracted. He knew the 100 other men in the college, or the 125 other men, but apparently knew them only as a man knows another student passing him day by day. I had the other boy sit down a few evenings ago, and, taking the Harvard catalogue, make out a statement of the number of men whom he knew intimately, the number of men whom he knew fairly well, and the number of men with whom he had a speaking acquaintance. He made out that he knew 115 men well, that he knew 225 men fairly well, that he had a speaking acquaintance with 300.

The fact is, where you discuss this problem of the relative advantages of a small and a large college, you are making use of that interesting intellectual process which is known in algebra as the solving of indeterminate forms. This does not mean equations that cannot be determined, but equations that have an infinite number of solutions. In a word, you are discussing a question to which there is no definite answer.

There are men who would be better off in a small village than in a large town, if you had some sort of human chemical reaction to determine in advance which man's nature was suited to the smaller place and which to the larger.

There are boys, undoubtedly, who would do better in a small group of men than in the larger college world of a great university or a large college. But there is no human way of finding out that fact, and in the long run the great rewards and the larger opportunities, it seems to me, are very apt to lie just as they lie in the comparison between a small city and a large one. There is added security perhaps, greater safety, greater conservatism in the smaller place. There is a larger opportunity in the larger place, with a larger population. So long as those two conditions hold it will always be impossible to tell whether the boy will do the better in the one place or in the other.

Three claims have been introduced as making strong reasons for choosing smaller colleges. One of these is the argument that the small college is the safer place, because it is usually in a small and isolated community. I do not think there is anything in that argument, because I have always noticed that wherever you locate a college in a small town, in order to free a student from temptation, there is always some wicked place about ten or twenty miles away to which these fellows are very apt to go. In the second place, the argument which is made for a more intimate relation between student and student is one which again, I think, has little significance. A boy in a large college will have also his intimates, and so far as my boy's experience goes, will have more. The third argument which is made is the closer contact between teacher and student. There, I think, is a real point— a real advantage in favor certainly of smaller colleges as against some larger colleges; but that again is a point which is purely a matter of organization. It is just as possible to bring 2,000 students in contact with professors who shall be strong, who shall be influential, who shall be inspiring, as it is to bring 300 students into contact; but in order to do it you must have more professors, you must have a larger faculty, you must have better facilities; and these are not always provided. And so it seems to me that when a small college provides really fine men in a large proportion to its student body, it does offer in that respect certain real advantages. On the other hand, if you contribute a proportionately large number of men to a large student body, you have offered practically the same advantage. And so you find yourself once again, it seems to me, face to face with a problem which is practically insoluble in any particular case.”

In sum, Pritchett, if he were able to come forward in time a century, might well be apt to use or consult a "human molecular engineer", who in turn would use chemical engineering thermodynamics principles, to facilitate or "determine in advance", using chemical reaction prediction methods, the choice or direction as to Pritchett giving counseled engineered guidance as to the question of which college, large or small, to send each of his two sons to, and experiment that he was forced to "conduct" on his own, as he says, because the subject of "human chemical reaction theory" was not yet a central science in his day. Said another way, just as German polyintellect consulted the "affinity tables" to engineer the reactions of the chapters of his novella, via use of human affinity table methods, so to would the modern thinker turn to human free energy theory, and hence free energy tables for human chemical reaction calculations, to engineer reactions of one's children.

Education
Pritchett completed his AB at Pritchett College in 1875, his PhD at the University of Munich in 1895. From 1875 to 1880 he worked as an astronomer and from 1881 to 1897 he was professor of mathematics and astronomy at Washington State University, St. Louis. From 1900 to 1907 he was the president of the Massachusetts Institute of Technology.