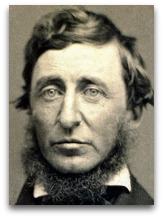 In existographies, Henry Thoreau (1817-1862) (IQ:160|#520) [RGM:179|1,500+] was an American essayist, poet, and philosopher; a student of Ralph Emerson; noted for his Civil Disobedience, on the idea of “[non-violent] refusing to cooperate with evil systems” influenced many geniuses, e.g. Leo Tolstoy, Martin King, etc.

Quotes | By
The following are quotes by Thoreau:

“I, standing twenty miles off, see a crimson cloud in the horizon. You tell me it is a mass of vapor which absorbs all other rays and reflects the red, but that is nothing to the purpose, for this red vision excites me, stirs my blood, makes my thoughts flow, and I have new and indescribable fancies, and you have not touched the secret of that influence. If there is not something mystical in your explanation, some-thing inexplainable to the understanding, some elements of mystery, it is quite insufficient. If there is nothing in it which speaks to my imagination, what boots it? What sort of science is that which enriches the understanding, but robs the imagination? ... if we knew all things thus mechanically merely, should we know anything really?”

“Nothing is so much to be feared as fear; god himself likes atheism better.”

“There is more religion in man’s science than there is science in his religion.”