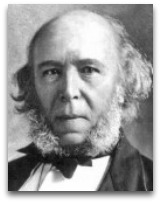 Overview
In the 1850s, Spencer was working an equilibrium theory of energy, evolution and society. Sometime therein he began to apply energy, possibly some version of the first law, or more generally the conservation of energy to the explanation of biological evolution (evolutionary thermodynamics) and in some respects sociology. [1] One of his noted views is as follows: [7]

“If the general law of transformation and equivalence holds of forces we class as vital and mental, it must hold also of those which we class as social.”

In circa 1858, Spencer was "staggered" when he was told by Irish physicist John Tyndall that the end state of equilibration is a state of heat death in which life ceases. The following is a truncated section of the famous 1858 Spencer letter to John Tyndall. [4]

“In the first place I fully recognize, and have all along recognized, the tendency to ultimate equilibrium …The universal tendency towards equilibrium must apply to human actions as well as to others. All our hourly doings are endeavours to equilibrate our acts and wants. Those modifications of faculty which we are ever undergoing are continuous approximations to equilibrium between constitution and conditions … There must be change until equilibrium is reached. This applies to man in his social relations. Society must go on changing until all men’s constitutions and their circumstances are in correspondence—until the desires of each are such only as may be gratified without thwarting the desire of others…Thus you see that my views commit me most fully to the doctrine of ultimate equilibration.

That which was new to me in your position enunciated last June, and again on Saturday, was that equilibrium was death [heat death]. Regarding, as I have done, equilibrium as the ultimate and highest state of society, I have assumed it to be not only the ultimate but also the highest state of the universe. And your assertion that when equilibrium was reached life must cease, staggered me. Indeed, not seeing my way out of the conclusion, I remember being out of spirits for some days afterwards. I still feel unsettled about the matter.”

This issue took him the next forty years to reconcile. [1] One of the underlying problems here is that at the time of Spencer's theorizing, the subject of chemical thermodynamics had not yet been worked out, something that would not solidify as "modern" until 1933 with the publication of Edward Guggenheim's Modern Thermodynamics by the Methods of Willard Gibbs, according to which the type of governing "equilibrium" in social evolution terms is that of free energy (see: human free energy) as dictated by the isothermal-isobaric reaction conditions of society.

In his 1862 treatise First Principles, Spencer gave prominence to four types or orders of equilibrium or “equilibration”. [2] One of these, called a “moving dependent” equilibration, where expenditure of energy is balanced by the supply of fuel, as exemplified by the steam engine, was used to explain evolutionary adaptation. [1] The force that is dissipated by the machinery, in short, is replaced by the fuel fed into the furnace that heats the boiler.

Education
Spencer was educated in empirical science by his father, William George Spencer, who ran a school founded on the progressive teaching methods of Swiss educator Johann Pestalozzi, also serving as secretary of the Derby Philosophical Society, a scientific society which had been founded in the 1790s by Erasmus Darwin, the grandfather of Charles Darwin.

While the members of the Derby Philosophical Society introduced Spencer to concepts of biological evolution, particularly those of Erasmus Darwin and French naturalist Jean Lamarck, his uncle, the reverend Thomas Spencer, vicar of Hinton Charterhouse near Bath, completed Spencer’s limited formal education by teaching him some mathematics and physics, and enough Latin to enable him to translate some easy texts. Otherwise, Spencer was an autodidact who acquired most of his knowledge from narrowly focused readings and conversations with his friends and acquaintances. [6]

First principles
In 1862, Spencer published First Principles: of a New System of Philosophy, the work he is best known for, the fourth edition published in 1880, in which he sought to reconcile the subjects of religion, psychology, and sociology, the latter defined as the “science of human relations”, with physics, chemistry, and biology, all themed on premise of evolution. [2] Spencer’s use of the conservation of energy is found in his chapter “The Persistence of Force”, where in a footnote he discusses why he prefers the word “force” to “energy” and “persistence” to “conservation”.

Social organism
Spence, along with French philosopher Pierre Teilhard, are often attributed as being the originators of the "social organism" theory, in which a society is considered as a large living organism. In 1876, to cite on example, Spencer posed the query:

Criticism
Due to the fact that Spencer had limited formal education in mathematics and physics, his work was nearly all verbal, and suffered in some respects in the eyes of early thermodynamicists. Scottish physicist James Maxwell, for instance, in a 29 July 1876 letter to Scottish physicist Peter Tait, states: [3]

“Have you Willard Gibbs' Equilibrium of Heterogeneous Substances. If not read him. Refreshing after H. Spencer on the Instability of the Homogenous.”


In the Appendix to First Principles, to note, Spencer devotes a section to deal with certain criticisms by Tait, citing quotes by Maxwell as well as references to William Thomson. [2] This all circled around a debate between Tait and Spencer, on the topic of Spencer’s laws of motion, taking place in the correspondence columns of the journal Nature from March to June 1874. [5]

Quotes | On
The following are quotes on Spencer:

“Moving equilibria play an important role in evolutionary processes of the most varied type, as emphasized almost ad nauseam by Herbert Spencer, though some of the most typical and at the same time most fundamental examples were unknown to him.”