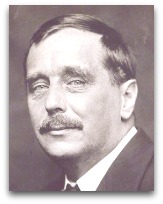 “The descendents of man will nourish themselves by immersion in nutritive fluid. They will have enormous brains, liquid, soulful eyes, and large hands, on which they will hop. No craggy nose will they have, no vestigial ears; their mouths will be a small, perfectly round aperture, unanimal, like the evening star. Their whole muscular system will be shriveled to nothing, a dangling pendant to their minds.”

The editors of Punch magazine, in reference to this view, made the following illustration: 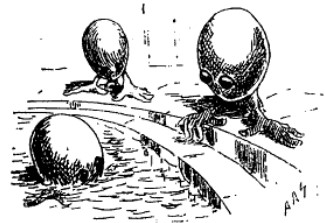 Education
In 1887, Wells, age 21, after attending the Normal School of Science, in South Kensington, now part of the University of London, during which time he studies biology (chnopsology) or physiology under Thomas Huxley, left school without earning a degree. Wells then went on, under the spell of Huxley’s pessimism, to probe the consequences of evolutionary theory run amok, in novels such as: The Island of Dr. Moreau (1896), The War of the Worlds (1898), and The First Men in the Moon (1901). [2]

Quotes | On
The following are quotes on Wells:

“In the early nineteen-twenties it had become clear that natural science and technology would continue their triumphant advances while the social and humane studies, in order to reduce their tragic lag, would need to be equipped with methods far more effective than archaic types of merely verbal reasoning. With untrammeled enthusiasm of a youthful PhD in physics, I expected to find a general sympathy with this [social physics] program but the case was otherwise. There is a proverb that ‘in the country of the blind the one-eyed man is king’, the falsity of which has been depicted in the story by H.G. Wells. One has to find for himself that in the country of the blind—meaning university faculties and their learned societies—the one-eyed man meets with lifted eyebrows.”

— John Q. Stewart (c.1955), commentary on the friction involved in his decade-long effort to get “social physics” established at Princeton

Quotes | By
The following are quotes by Wells: