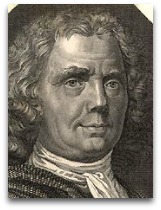 In existographies, Herman Boerhaave (1668-1738) (IQ:180|#201) (Cattell 1000:368) (Partington 50:37) (Farber 114:11) (GCE:26) [CR:95] was a Dutch physician, chemist, and botanist, characterized a "great genius" (Mettrie, 1747) and "minor Aristotle" (Cardwell, 1971), notable for the publications of his 1724 textbook Elements of Chemistry, sometimes referred to as Traite du feu or “Treatise on fire”, an outgrowth of his lectures at Leiden University, in which he outlined influential theories on heat, fire, and expansion of bodies (see: Boerhaave's law). [1] The publication of Boerhaave’s textbook is said to mark the start of the modern concept of chemistry. [7] Boerhaave is considered one of the pioneers in physical chemistry, for introducing quantitative methods into the measure of temperature and mass and for carrying out some of the first calorimetric research.

In 1741 an English translation of Boerhaave's celebrated textbook Elements of Chemistry was published under the title A New Method of Chemistry, in which, in his chapter on fire, one can find demonstrations and experiments that can be instructively performed today, quantitative data that can be checked against modern equations, and much theory and hypothesis that can be assessed in light of modern chemical ideas. [8]

Boerhaave's law
In his publications, Boerhaave established as physical axiom, or universal proposition, in what came to be known as "Boerhaave's law", which states that: [1]

“Ever body, whether solid or fluid, is augmented in all its dimensions by any increase of its sensible heat.”

This law or axiom of heat was the opening sentence to French chemist Antoine Lavoisier’s 1787 Elements of Chemistry. [2]

Affinity
Boerhaave, according to English science historian William Whewell, is credited with having been one of the first affinity chemists:

“To Boerhaave, therefore—especially considering his great influence as a teacher of chemistry—we may assign the merit of first diffusing a proper view of chemical affinity as a peculiar force, the origin of almost all chemical changes and operations.”

— William Whewell (1840), “The Establishment and Development of the Idea of Chemical Affinity” [9]

Love | Chemistry
In 1732, Boerhaave, in one of this chemistry works, famously pronounced an ambivalent statement, or "paradoxical assertion" as he put it, about how chemical bonds or interactions were at type of copulae cupido or "love match", the main section of which seems to be the following:


In another place, he says:

“When we make a chemical solution, not only are the particles of the dissolved body separated from each other, but they are closely united to the particles of the solvent. When aqua regia dissolves gold, do we not see that there must be between each particle of the solvent and of the metal, a mutual virtue by which each loves, unites with, and holds the other (amat, unit, retinet)?”

In the century to follow, this began to be summarized to the effect that Boerhaave "poetically" or "metaphorically" compared the force of affinity or chemical affinity" with “love, if love be the desire for marriage”. [5]

In 1840, William Whewell, in his “The Establishment and Development of the Idea of Chemical Affinity”, had the following to say about Boerhaave's comments on chemistry and love: [9]

“In 1775, the Swedish chemist Bergman, pursuing still further this subject of chemical affinities, and the expression of them by means of tables, returned again to the old Newtonian term; and designated the disposition of a body to combine with one rather than another of two others as elective attraction. And as his work on Elective Attractions had great circulation and great influence, this phrase has obtained a footing by the side of affinity, and both one and the other are now in common use among chemists.

There are some analogies drawn from the common meaning of this word, which appear to recommend it as suitable for the office which it has to discharge. For common mechanical attractions and repulsions, the forces by which one body considered as a whole acts upon another external to it, are, as we have said, to be distinguished from those more intimate ties by which the parts of each body are held together. Now this difference is implied, if we compare the former relations, the attractions and repulsions, to alliances and wars between states, and the latter, the internal union of particles, to those bonds of affinity which connect the citizens of the same state with one another, and especially to the ties of family.

We have seen that Boerhaave compares the union of two elements of a compound to their marriage; “we must allow,” says an eminent chemist [Jean Dumas, 1837] of our own time”, “that there is some truth in this poetical comparison.” It contains this truth, that the two become one to most intents and purposes, and that the unit thus formed (the family) is not a mere juxtaposition of the component parts. And thus the idea of affinity as the peculiar principle of chemical composition, is established among chemists, and designated by a familiar and appropriate name.”

Influenced
One of Boerhaave's notable students was English physicist and chemist Andrew Plummer, professor of chemistry at the University of Edinburgh from 1726 to 1755, whose ideas on attractive and repulsive forces involved in chemical affinity had influence on his successors Scotts physician and chemist William Cullen and physicist and chemist Joseph Black.

Education
Boerhaave completed a PhD in physics, which he obtained in July, 1693, having performed a public disputation: "The use of the waste matters in the investigation into the sick, as a sign of" ("de utilitate explorandorum excrementorum in ægris, ut signorum"). Later he obtained an MD. Boerhaave was an associate of Polish physicist Daniel Fahrenheit, who communicated to Boerhaave his thermometer developments in letters of correspondence.

Quotes | On
The following are quotes on Boerhaave:

“One should have continually before one’s eyes these two perfect models that the two great men of the century have left us: the Opticks of Newton and the Chemistry of Boerhaave.”

Quotes | By
The following are quotes by Boerhaave:

“Although we are able to discuss the ‘force of fire’ by its sensible effects; yet, we cannot from its force make certain judgments of its quantity.”

“It is demonstrated by the geometers that if bodies remain the same in all other circumstances, the bigger they are the less surface they will always have in proportion to their solidity.”

“Among all the bodies of the universe, that have hitherto been discovered and examined, there never was yet found any one, that had spontaneously, and of its own nature, a greater degree of heat than any other.”

“Air of unequal masses, but of the same density, is always expanded in the same measure by the same ‘degree of fire’; so that these expansions in the same density of air, by a constant law of nature, are always proportional to the augmentations of heat.”