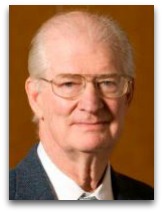 In existographies, Herman Daly (1938-) (CR:31) is an American economist noted, in economic thermodynamics, for his work, beginning in the late 1970s, in theorizing on the overlap of economics, ecology, and thermodynamics. Daly is considered a pioneer in the field of ecological economics, which relies on thermodynamic principles to some extent, as found in his 2004 textbook Ecological Economics. [1]

Education
Daly completed his PhD in 1967 under Romanian mathematician Nicholas Georgescu, noted author of The Entropy Law and the Economic Process (1971), at Vanderbilt University, with a dissertation on “Trade Control and the Uruguayan Economy”. [3] Daly's highly-cited 1968 article “On Economics as a Life Science” was already employing Georgescu’s material entropy theory: [7]

“Since useful (low entropy) matter-energy is apparently finite, the total life process could be brought to a halt by what Boulding has called ‘the entropy trap’. Thus one of the ultimate natural sources of scarcity is low-entropy matter-energy.”

In his 1977 Steady State Economics, Daly criticized the failure of mainstream economics to account for, what he considered, the throughput of low-entropy natural resources. [6]

Overview
In 1980, Daly, in commentary on Frederick Soddy’s economic theories, stated the following:

“Debt can endure forever; wealth cannot, because its physical dimension is subject to the destructive force of entropy.”

“If confess that it is a matter of some consternation and distress to me that twenty-two years after the publication of The Entropy Law and the Economic Process on can still find no trace of their influence in the standard principles [economics] textbooks.”

On this question, he goes on to outline what he thinks would need to be changed in standard economics textbooks so to accommodate Georgescu-Roegen’s view of entropy (material entropy). On Georgescu-Roegen’s fallacious view of matter-energy as type of entropy, Daly makes the same mistakes. Daly states, for example, that the isolated circular flow diagrams of the hypothetical economic process, from firms to households and back again, would need to be changed to one analogous to the digestive tract of an animal in which, according to Daly, “they continuously take in low-entropy matter/energy and give back high-entropy matter/energy … an organism cannot recycle its own waste products.” This view, which Daly claims to be common to biology textbooks, however, is fallacious view of what entropy is; propagated by Georgescu-Roegen.