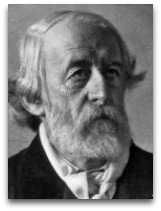 In human chemistry, Herman Friedrich Grimm (1828-1901) was a German author, art historian, philosopher, and Goethean biographer noted for his 1875 University of Berlin lecture “Study of Natural Science: The Natural Daughter and Elective Affinities”, as found in his 1880 book The Life and Times of Goethe, in which he discussed the origin, theory, and implications of German polymath Johann Goethe’s version of humanity in the context of natural science, i.e. his human elective affinity theory, as contained in his 1809 novella Elective Affinities, a novella which Grimm says has been has been referred to by critiques over the prior fifty years as “Goethe’s most dangerous work”. [1]

Dangerous work
The view of Goethe’s Elective Affinities, as summarized by Grimm, as "Goethe’s most dangerous work" (as recounted by Astrida Tantillo, 2001), to note, is near synonymous in reactionary style to the reactionary language used, nearly two-hundred years later, in the 2006 Rossini debate, on the possibility of American chemical thermodynamicist Frederick Rossini’s hypothesis that chemical thermodynamics might be able to explain the nature of the freedom vs. security, as would be applicable to a post 9/11 world. [2] As stated by (religiously-biased) physical chemist John Wojcik in one heated part of his response letter to Journal of Chemical Education: [3]

“The danger of such anthropomorphisms is that we really come to believe that there is substance in them. In this particular case, there is the danger that true human freedom will be reduced to some sort of physical freedom on the same par with entropy. There is the danger that some will think that true human freedom can be measured in terms of some sort of calculus of simultaneous maximums and minimums. And worst of all, there is the danger that chemical thermodynamics will have ascribed to it a power that it simply does not have, namely, the power to “explain” the human condition. There may be a sense in which chemistry is the “Central Science”. This is certainly not it.”

No doubt, being that affinity chemistry was the forerunner to chemical thermodynamics, similar arguments were voiced during these fifty-years, as Grimm summarized, as to the underlying premise and implications of Goethe’s novella: namely that Goethe's version of affinity chemistry based morality (or physical chemistry base morality in modern terms) supplants and in fact replaces all of the world religions, and as such the unwritten bedrock of modern society; meaning that a very dangerous revolution in thinking may possibly be awaiting future generations of humankind.

Education
Grimm became a doctor in Leipzig in 1868 and then in 1870 a professor of philosophy and law in Berlin. He became a teaching professor for New Art History at the University of Berlin in 1873.

Grimm returned to Goethe at all stages of his life, in a large variety of essays and most notably in the 25 lectures he gave in 1874–75 (published as Goethe in 1876–77) as the first professor of aesthetics and modern art history at a German university, that of Berlin. [5]

In 1885, he became co-founder of the Goethe-Gesellschaft, and himself a publisher of some of Goethe's works. [3] He was an admirer and or associate of American Ralph Emerson, another Goethean promoter and advocate, one of the reasons he had his lectures on Goethe translated for publication in America.