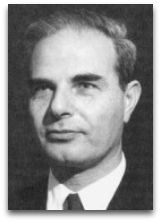 In physiology, Herman Kalckar (1908-1991) was a Danish-born American biochemist, associated with the Lewis school of thermodynamics, noted for his 1939 theory of the coupling of energy of phosphorylation to oxidation reactions. [1] Kalckar coupling theories were built on the earlier 1930 work of his mentor Danish physiologist Ejnar Lundsgaard. In the mid 1930s, Kalckar began to collaborate with German biochemist Fritz Lipmann who would go on to popularize the now-famous 1941 ATP energy currency theory.

Education
Kalckar completed his MD at the University of Copenhagen in 1933. At some point in the 1930s, Kalckar began to work with German biochemist Fritz Lipmann who had moved to Copenhagen in 1932. Lipmann became one of Kalckar's mentors and a close friend, a relationship that was to be lifelong. Lipmann was already deeply interested not only in Lundsgaard's work on the role of phosphate esters in muscle contraction but also in the biological functions of phosphorylation reactions more generally.

In 1934, Kalckar began working on his PhD in the physiology department under the direction of Danish physiologist Ejnar Lundsgaard. Lundsgaard had earlier made the important finding that frog muscles poisoned with iodoacetate and therefore unable to carry out glycolysis (the splitting of glucose to lactic acid) are nevertheless capable of carrying out a limited number of contractions. Lundsgaard later showed that these "nonlactic" contractions were at the expense of the dephosphorylation of creatine phosphate, which had been discovered and characterized only a few years earlier by American biochemist Cyrus Fiske at the Harvard Medical School. [2]

In 1939, having completed his PhD work, Kalckar worked for a year at the California Institute of Technology in Pasadena, were he was famously said to be in “the orbit of the great G. N. Lewis school of thermodynamics”. [3] During his stay in Pasadena, with the encouragement of Linus Pauling, Kalckar undertook the preparation of a comprehensive review of bioenergetics with emphasis on the role of phosphate esters in energy transduction. Its publication in 1941 did much to advance the new ideas that he and German biochemist Fritz Lipmann were pursuing. [5]

This synergistic association, no doubt, was a great impetus behind Lipmann’s famous 1941 paper “Metabolic Generation and Utilization of Phosphate Bond Energy” on ATP energy coupling.