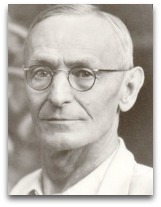 In existographies, Hermann Hesse (1877-1962) was a German-born Swedish novelist, poet, and painter, noted for []

Glass Bead Game
In 1943, Hesse published The Glass Bead Game, a futuristic novel, set in the 25th century, about a subsect class of intellectuals; the following is an abstract: [1]

“The Glass Bead Game takes place at an unspecified date centuries into the future. Hesse suggested that he imagined the book's narrator writing around the start of the 25th century. The setting is a fictional province of central Europe called Castalia, which was reserved by political decision for the life of the mind; technology and economic life are kept to a strict minimum. Castalia is home to an austere order of intellectuals with a twofold mission: to run boarding schools, and to cultivate and play the Glass Bead Game, whose exact nature remains elusive and whose devotees occupy a special school within Castalia known as Waldzell. The rules of the game are only alluded to—they are so sophisticated that they are not easy to imagine. Playing the game well requires years of hard study of music, mathematics, and cultural history. The game is essentially an abstract synthesis of all arts and sciences. It proceeds by players making deep connections between seemingly unrelated topics.”

Quotes | By
The following are quotes by Hesse:

“Most men, the herd, have never tasted solitude. They leave father and mother, but only to crawl to a wife and quietly succumb to new warmth and new ties. They are never alone, they never commune with themselves. And when a solitary man crosses their path, they fear him and hate him like the plague; they fling stones at him and find no peace until they are far away from him. The air around him smells of stars, of cold stellar spaces; he lacks the soft warm fragrance of the home and hatchery.”