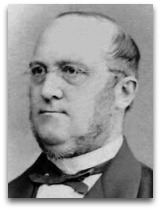 In existographies, Hermann Kolbe (1818-1884) (GCE:#) (CR:13) was a German chemist, semi-ranked as a greatest chemist ever, noted for his 1845 prepared acetic acid from its elements; oft-classified as one of the quenchers in the organic from inorganic vitalism debate, following Friedrich Wohler’s 1828 synthesis of “organic” urea from “inorganic” ammonium cyanate. [1]

“If the concept, however, is extended to include the assumption that the vital force, pushes out and replaces the original forces of matter, so that the latter cease to operate, then one has gone too far; for at times it is possible by experimentation to unite the lifeless fundamental substances into compounds identical with those that are formed through vital processes.”

Religion
Kolbe's religious views is not straightforward. Apparently, Kolbe intended to accede to his father's desire for him to enter the ministry, until at the age of eighteen he discovered chemistry. Conversely, Edward Frankland, a good friend who spent much time with Kolbe from 1845 to 1850, described him much later as an "agnostic".

As professor in Leipzig, Kolbe placed the Biblical quotation "God has arranged all things by measure and number and weight" (Wisdom of Solomon 11:20) in large letters above the chart of the chemical elements at the front of his lecture theater.

When Kolbe's successor Johannes Wislicenus first saw the placard, he said to his guide, "that must disappear!" (Ѻ)

References
1. Roscoe, Henry. (1887). “President’s Inaugural Address” (Ѻ), British Association for the Advancement of Science, Manchester.
2. Scott, George P. (1985). Atoms of the Living Flame: an Odyssey into Ethics and the Physical Chemistry of Free Will (pg. 92). University Press of America.