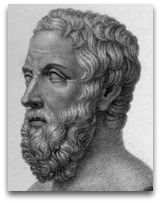 Ra | Phoenix
Herodotus, in his chapter on Egypt, in recounting the various animals he learned of and seen with his own eyes, e.g. crocodile, hippopotamus, otter, and eel, the gives the following account of the sun god Ra, which he was told was a sacred bird that rarely appears:

“There is also another sacred bird, called the phoenix, which I have never seen except in a picture; for it seldom makes its appearance among them, only once in five hundred years, as the Heliopolitans affirm: they say that it comes on the death of its sire. If he is like the picture, he is of the following size and description: The plumage of his wings is partly golden-colored, and partly red; in outline and size he is very like an eagle. They say that he has the following contrivance, which in my opinion is not credible. They say that he comes from Arabia, and brings the body of his father [god name] to the temple of the sun, having enclosed him in myrrh, and there buries him in the temple. He brings him in this manner: first he molds an egg of myrrh as large as he is able to carry; then he tries to carry it, and when he has made the experiment, he hollows out the egg, and puts his parent into it, and stops up with some more myrrh the hole through which he had introduced the body, so when his father is put inside, the weight is the same as before: then, having covered it over, he carries him to the temple of the sun in Egypt. This they say is done by this bird.”

“Their manner of mourning and burying is as follows: When in a family a man of any consideration dies, all the women of that family besmear their heads and faces with mud, and then leaving the body in the house, they wander about the city, and beat themselves, having their clothes girt up, and exposing their breasts, and all their relations accompany them. On the other hand, the men beat themselves, being girt up, in like manner. When they have done this, they carry out the body to be embalmed. There are persons who are appointed for this very purpose; they, when the dead body is brought to them, show to the bearers wooden models of corpses, made exactly like by painting. And they show that which they say is the most expensive manner of embalming, the name of which I do not think it right to mention on such an occasion; they then show the second, which is inferior and less expensive; and then the third, which is the cheapest. Having explained them all, they learn from them in what way they wish the body to be prepared; then the relatives, when they have agreed on the price, depart; but the embalmers remaining in the workshops thus proceed to embalm in the most expensive manner.

First they draw out the brains through the nostrils with an iron hook, taking part of it out in this manner, the rest by the infusion of drugs. Then with a sharp Ethiopian stone they make an incision in the side, and take out all the bowels; and having cleansed the abdomen and rinsed it with palm-wine, they next sprinkle it with pounded perfumes. Then having filled the belly with pure myrrh pounded, and cassia, and other perfumes, frankincense excepted, they sew it up again; and when they have done this, they steep it in natrum, leaving it under for seventy days; for a longer time than this it is not lawful to steep it.”

The period of seventy days, to note, has been attributed to the number of days the star Sirius was gone from sight, prior to the Jun 25h heliacal rising, for a brief moment, just before sunrise, which marks the start of the Nile River flood. Herodotus continues:

“At the expiration of the seventy days they wash the corpse, and wrap the whole body in bandages of flaxen cloth, smearing it with gum, which the Egyptians commonly use instead of glue. After this the relatives, having taken the body back again, make a wooden case in the shape of a man, and having made it, they enclose the body; and thus, having fastened it up, they store it in a sepulchral chamber, setting it upright against the wall. In this manner they prepare the bodies that are embalmed in the most expensive way. Those who, avoiding great expense, desire the middle way, they prepare in the following manner: When they have charged their syringes with oil made from cedar, they fill the abdomen of the corpse without making any incision or taking out the bowels, but inject it at the fundament; and having prevented the injection from escaping, they steep the body in natrum for the prescribed number of days, and on the last day they let out from the abdomen the oil of cedar which they had before injected, and it has such power that it brings away the intestines and vitals in a state of dissolution; the natrum dissolves the flesh, and nothing of the body remains but the skin and the bones. When they have done this they return the body without any further operation. The third method of embalming is this, which is used only for the poorer sort: Having thoroughly rinsed the abdomen in syrmaea, they steep it with natrum for the seventy days, and then deliver it to be carried away. But the wives of considerable persons, when they die, they do not immediately deliver to be embalmed, nor such women as are very beautiful and of celebrity, but when they have been dead three or four days they then deliver them to the embalmers; and they do this for the following reason, that the embalmers may not abuse the bodies of such women; for they say that one man was detected in abusing a body that was fresh, and that a fellow-workman informed against him. Should any person, whether Egyptian or stranger, no matter which, be found to have been seized by a crocodile, or drowned in the river, to whatever city the body may be carried the inhabitants are by law compelled to have the body embalmed, and, having adorned it in the handsomest manner, to bury it in the sacred vaults. Nor is it lawful for any one else, whether relatives or friends, to touch him; but the priests of the Nile bury the corpse with their own hands, as being something more than human.”

Greek | Egyptian mythology
Herodotus, in his observations of the Egyptians, established Greco-Egyptian equivalents that endured into the Hellenistic era, including Amen-Ra/Zeus, Osiris/Dionysus, and Ptah/Hephaestus. [2]

“This relation I had from the priests of Vulcan [Ptah] at Memphis. I heard other things also at Memphis in conversation with the priests of Vulcan. And on this very account I went also to Thebes, and to Heliopolis, in order to ascertain whether they would agree with the accounts given at Memphis; for the Heliopolitans are esteemed the most learned in history of all the Egyptians. They say also that the Egyptians were the first who introduced the names of the twelve gods, and that the Greeks borrowed those names from them; that they were the first to assign altars, images, and temples to the gods, and to carve the figures of animals on stone; and most of these things they proved were so in fact.”

“I have held converse with the priests of Hephaistos (Ptah) at Memphis. I went to Thebes and to Heliopolis intent on discovering if the information I gathered in Memphis would be verified, since the Heliopolitans are regarded as the wisest of Egyptians. As to their explanations of the ‘sacred’, I am not keen on fully disclosing that knowledge except perhaps in giving the names of certain rituals which I consider to be already 'common currency' among men.”

“Ethiopians inhabit the country immediately above Elephantine, and one half of the island; the other half is inhabited by Egyptians. Meroe is said to be the capital of all Ethiopia. The inhabitants worship no other gods than Jupiter and Bacchus; but these they honor with great magnificence; they have also an oracle of Jupiter; and they make war, whenever that god bids them by an oracular warning, and against whatever country he bids them.”

“All the Egyptians sacrifice the pure male kine and calves, but they are not allowed to sacrifice the females, for they are sacred to Isis; for the image of Isis is made in the form of a woman with the horns of a cow, as the Grecians represent Io; and all Egyptians alike pay a far greater reverence to cows than to any other cattle. So that no Egyptian man or woman will kiss a Grecian on the mouth, or use the knife, spit, or caldron of a Greek, or taste of the flesh of a pure ox that has been divided by a Grecian knife. They bury the kine that die in the following manner: the females they throw into the river, and the males they severally inter in the suburbs, with one horn, or both, appearing above the ground for a mark. When it is putrefied and the appointed time arrives, a raft comes to each city from the island called Prosopitis; this island is in the Delta, and is nine schoeni in circumference: now in this island Prosopitis there are several cities; but that from which the rafts come to take away the bones of the oxen is called Atarbechis; in it a Temple of Venus has been erected. From this city, then, many persons go about to other towns; and having dug up the bones, all carry them away, and bury them in one place; and they bury all other cattle that die in the same way that they do the oxen; for they do not kill any of them. All those who have a temple erected to Theban Jupiter, or belong to the Theban district, abstain from sheep, and sacrifice goats only. For the Egyptians do not all worship the same gods in the same manner, except Isis and Osiris, who, they say, is Bacchus; but these deities they all worship in the same manner.”

Persian empire
In 425BC, Egypt was invaded by Persian ruler Cambyses; the extent of the Persian empire, from Herodotus' The Histories, is as follows: 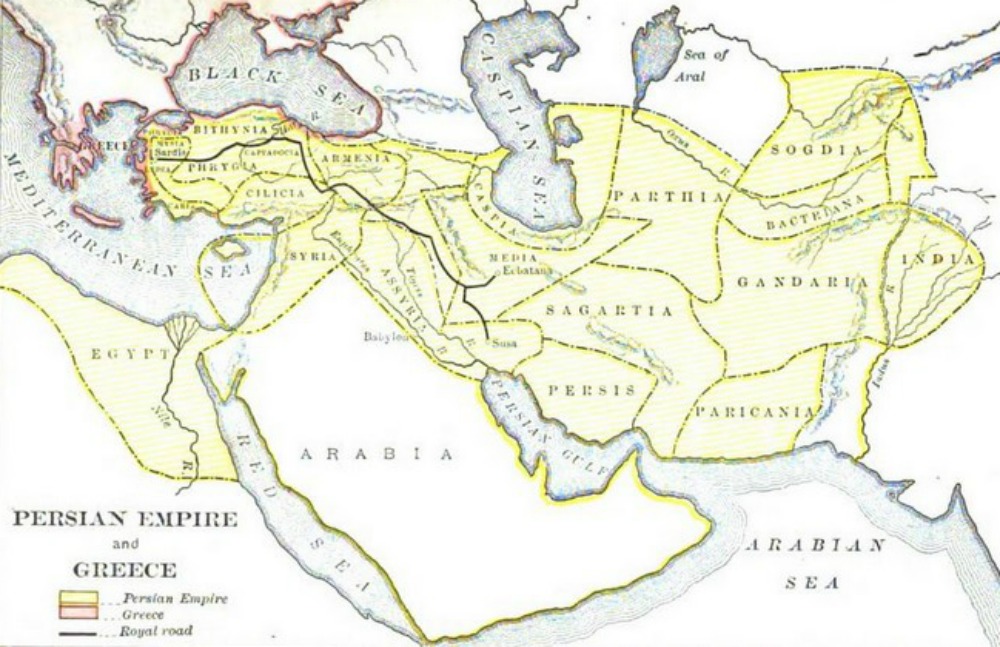 Herodotus (pg. 92) discusses the three ways Greeks, historically, have attempted to account for the Nile River flood, the latter of which he says being attributed to snow melting in the Ethiopian mountains.

Epicurus
In circa 290BC, Epicurus, in his “Letter to Herodotus” (Ѻ), he, supposedly, relegates the gods to the role of non-interfering material entities, in capable of controlling human affairs. [1]

“If a man insisted always on being serious, and never allowed himself a bit of fun and relaxation, he would go mad or become unstable without knowing it.”