In hmolscience, higher power is a neo-modern code term for “god”; oft-used in atheism discussions (e.g. “Zerotheism for Kids”, and god talk based discussions and arguments.

Social physics
Just as "spirits" and "higher powers", in physics, aren't going to charge one's cellphone, so too aren't spirits and higher powers, in sociophysics, going to charge up one's bank account. This conflict becomes apparent when thermodynamics students are taught the basic definition of work, namely that whenever a force moves a body work is done, the "body" in question being any material body in the universe (atom, rock, flower, bird, human, planet, star, or galaxy, etc.):

The following is an example of an American bioengineering thermodynamics student, following Libb Thims' 2010 UIC lecture, expressing objection (based on taught religious beliefs) to the premise that thermodynamics, the study of heat, work, and power, can be applied to the resolution and solution of social concerns and problems, e.g. economics, politics, national security, universal morality, etc: 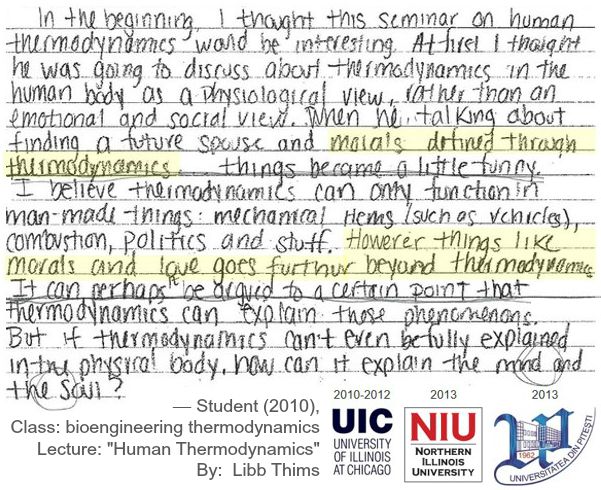 While this finger raising may seem innocuous, at this level (college-level), when such theory is applied to real-world problems, e.g. border security, immigration, social surveillance, security checks, etc., in a post-9/11 world, as heatedly debated in the 2006 Rossini debate, between college professors, the underlying confusion, taught to youth, about their being two types of powers in the universe, i.e. "standard" power of thermodynamics, e.g. governing batteries and combustion engines, and a "higher" power of spirituality or god, governing morality and society, is when misunderstanding about facts can quickly lead to national and global disaster.

“A creative force that either creates itself or arises from nothing, and which is a causa sui (its own cause), exactly resembles Baron Munchhausen, who drew himself out of the bog by taking hold of his own hair.”

“I am agnostic as to the question of god. Since man ceased to worship openly an anthropomorphic god and talked vaguely and not intelligently about ‘some force’ in the universe, higher than man, that is responsible for the existence of man and the universe, he cannot be said to believe in god. One cannot believe in a force excepting as a force that pervades matter and is not an individual entity.”

“If by any possibility the existence of a power superior to, and independent of, nature shall be demonstrated, there will be time enough to kneel. Until then, let us stand erect.”

“So, I’ll out myself. I’m an atheist. I don’t believe in god, gods, godlets or any sort of higher power beyond the universe itself, which seems quite high and powerful enough to me. I don’t believe in life after death, channeled chat rooms with the dead, reincarnation, telekinesis or any miracles but the miracle of life and consciousness, which again strike me as miracles in nearly obscene abundance.”

“Your higher power does not have to be god or the universe. It can be anything that brings you the deepest joy you have felt or can feel. When your demons are psychologically real, joy is exactly what is needed to save the day. It doesn’t matter how comes it comes to you, only that it does and that it is there to snatch you from the edge of the abyss.”

“You can teach kids science and you can teach kids to have faith in a higher power (and you can believe in both) ... but to each is own! What we shouldn't be doing is putting down each other's beliefs because that simply just discourages children. It is important to teach them to have beliefs whether it is in science or god or simply to believe in themselves.”

“The teachings in the Bible can be intimidating as so many questions arise and not enough answers. But to teach and instill atheism into a 6-year-old is ultimately stripping them of any type of beliefs whatsoever, in my opinion. You can challenge religious and biblical concepts, but what about spirituality? The idea that there is a higher power and focus ones energy and beliefs on that? The children are being stripped of that idea and taught to believe science wins?”

Further reading
● Schlafly, Phyllis and Neumayer, George. (2012). No Higher Power: Obama’s War on Religious Freedom. Regnery Publishing.
● Why has there been such a movement in science to state that there could be no "higher" being? (Ѻ) (2018) – Quora.
External links
● Higher power – Wikipedia.