In existographies, Hilda Finnemore (c.1884-c.1950) was an English children’s science educator, thing philosopher, noted for her 1924 children's science book A History of the Earth from Star-Dust to Man, wherein she gives a Henri Bergson conceptualized overview of atoms to humans view of things.

In 1924, Finnemore, in her A History of the Earth from Star-Dust to Man (pg. 2), attempted to outline, for children, a simple “nebula hypothesis to humans” (compare: big bang to human molecules) model, mixed with talk of star-dust, the first example of which is:

“Astronomers tell us of vast tracts set in the depths of space, filled with filmy, gaseous could, and these appear to be the stuff out of which suns are made. This immense mist of star-dust is throwing off worlds in an intensely hot or gaseous state. There, science suspects, may be the secret of our beginnings.”

Life | Materialistic soft-panbioism
Finnemore, in her opening "What Things are Made of" chapter, ended with the following "No Break in the Chain of Life" section: 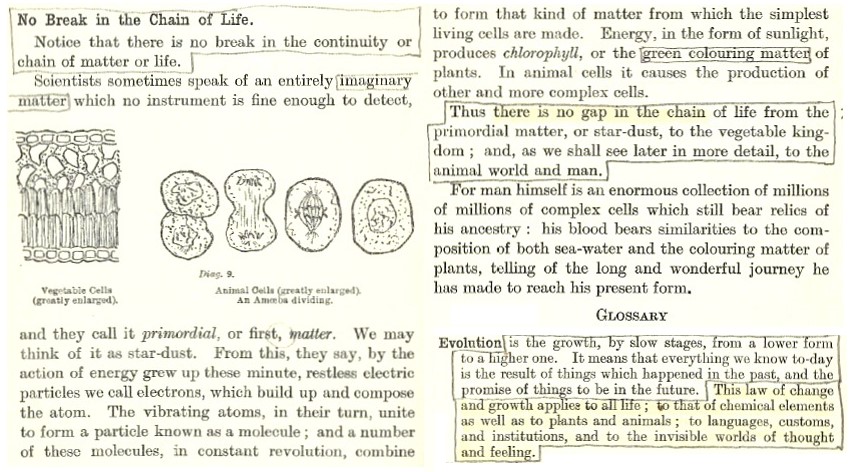 This seemingly-cogent synopsis can be classified, as shown, superficially, as "materialistic-implicit soft-panbioism". When, however, we dig into the citation roots of this summary, we find that Finnemore's main citation is Scottish science + religion reconciler Arthur Thomson and his four-volume The Outline of Science, referring to it as a “wonderful book”. [2] Thomson, in turn, is one of the main champions of the creative evolution views of Henri Bergson. The result is embedded confusion. It is as though she is trying to sell a painted superficial atheism implicit model of atoms to humans OVER a theistic structure. Her ending page suggests that people in the future should become more "spiritual" and less "material".

Life | Energy
On “life”, prior to the above statement, Finnemore (pg. 3) gives the following intelligent statements:

“Systems may wheel in space, and, in countless ages, cool to comfortable homes for the animal and vegetable families which come forth from them; minute mosses and lichens may develop into complex and highly organized plants and trees; single-celled atoms may unite and grow until man, which his wonderful brain, emerges; but what is it that causes the movement of the heavenly bodies, the growth of the cell, the unfolding and development of the organism? It is a motive power we may call ‘life’ or ‘energy’.”

Here, in her vacillation on the terms life or energy, we see a grasping at the defunct theory of life or life does not exist purview turned life terminology upgrades. On the term life, she elaborates as follows:

“What life is, not the most enlightened scientist or profound thinker can tell you. ‘We can show you life’, they say, ‘tell you how it will develop, when it will appear, how it acts, what breeds it and what destroys it; but we cannot tell you what it is. Without it we are nothing; with it we may become anything.” 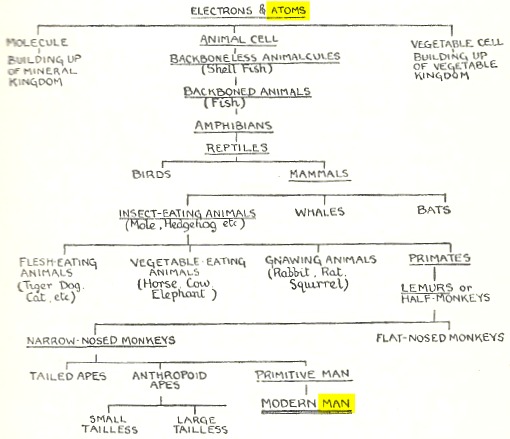 Finnemore explains (pg. 61) this life jelly or protobion as follows:

Here, of course, Finnemore is using a defunct scientific concept, i.e. “life force” that was disabused from science in the 19th century.

“It is only because our lives are so short compared to the slow, slow movement of evolution, that it is hardly possible to notice the change and growth either in the earth or in ourselves. Because we never knew Italy to look anything other but a Wellington boot, we never pause to think that it was once different, and may change again. Because we never knew that time when man grew his own furry dress, we overlook the fact that, as he has outgrown this likeness to the animal, he may still outgrow others. Yet we must make our minds broad enough to realize the facts. The hour of a watch moves so slowly that you cannot see it move; and yet you know that, so long as the watch is going, its movement never stops. The earth, from its rocks and gases and flowers and animals, is still ‘going’.”