In religion, Hinduism (TR:22) is a Anunian-rooted theology based on the teaching of the Vedas, Upanishads, Bhagavad Gita, and Agamas, according to which the universe was created by the god-goddess pair Brahma and Saraswati (a Ra + Isis derivative; equivalent to Abraham and Sarah in Christianity, Islam, and Judaism), that humans came following the great flood of MaNu (a Nun derivative; equivalent to Noah in Christianity, Islam, and Judaism), and that the four main goals or aims of existence are: dharma (ethics and duty), artha (prosperity and work), kama (emotions and sexuality), and moksha (liberation and freedom); which are connected to the theories of: karma (action, intent, and consequences) (aka third law of motion), samsara (cycle rebirth), and yogas (paths or practices to attain moksha (escape from the rebirth cycle).

The lotus closes at night and sinks underwater. In the morning, it re-emerges and blooms again. Thus, the flower, like the baboon and the dung beetle, became a natural symbol of the sun and creation.

In Hermopolis, it was believed that there was a giant lotus blossom that first emerged from the primordial waters of Nun and from which the sun-god came forth; a rendition of this image is the head coming out of the lotus flower, below left. (Ѻ) Below center, is the sun springing from an opening lotus flower, emerging out of the Nun or watery abyss, in the form of the child Horus. [8] Below right, we see Horus the pharaoh sitting on Lotus while wearing the double crown of Upper and Lower Egypt: [7] 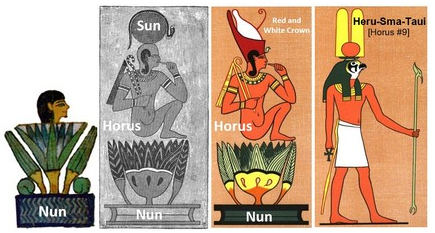 This so-called “great world lotus”, as Wallis Budge (1904) refers to it, is one of things, among the various Egyptian mythologies, out of which the sun rose for the first time. [7]

The specific “Horus” shown above, is the Heru-Sma-Taui, Horus #9, according to Budge classification, aka “Horus the Uniter of the South and North”, defined as the son of Hathor, who was believed to spring into existence out of a lotus flower which blossomed in the heavenly abyss of Nu at dawn at the beginning of the year. This version of Horus was worshipped at Aat-hehu, a district near Herakleopolis Magna (nome #19, Upper Egypt), Ant (Denderah) (nome #6, Upper Egypt) (Ѻ), and the city of Khatat. [7]

The head of a man coming out of the lotus, above left, comes from a vignette of the Theban recension of the Book of the Dead, which Budge describes as follows:

“In From Chapters lxxxi., versions A and B, we learn that the deceased had power to transform himself into a lotus; in the first version of the text he says, "I am the pure lotus which springeth up from "the divine splendour that belongeth to the nostrils of Ra," and in the second we read, "Hail, thou Lotus, thou type of the god "Nefer-Tem! I am he who knoweth you, and I know your "names among the gods, the lords of the Underworld, and I am "one of you." The vignette of the first version is a lotus, and that of the second is a lotus plant with a flower and buds growing out of a pool of water, and out of the flower springs a human head, i.e., the head of the deceased.”

The four sons of Horus, to note, are often shown on a rising lotus. (Ѻ) 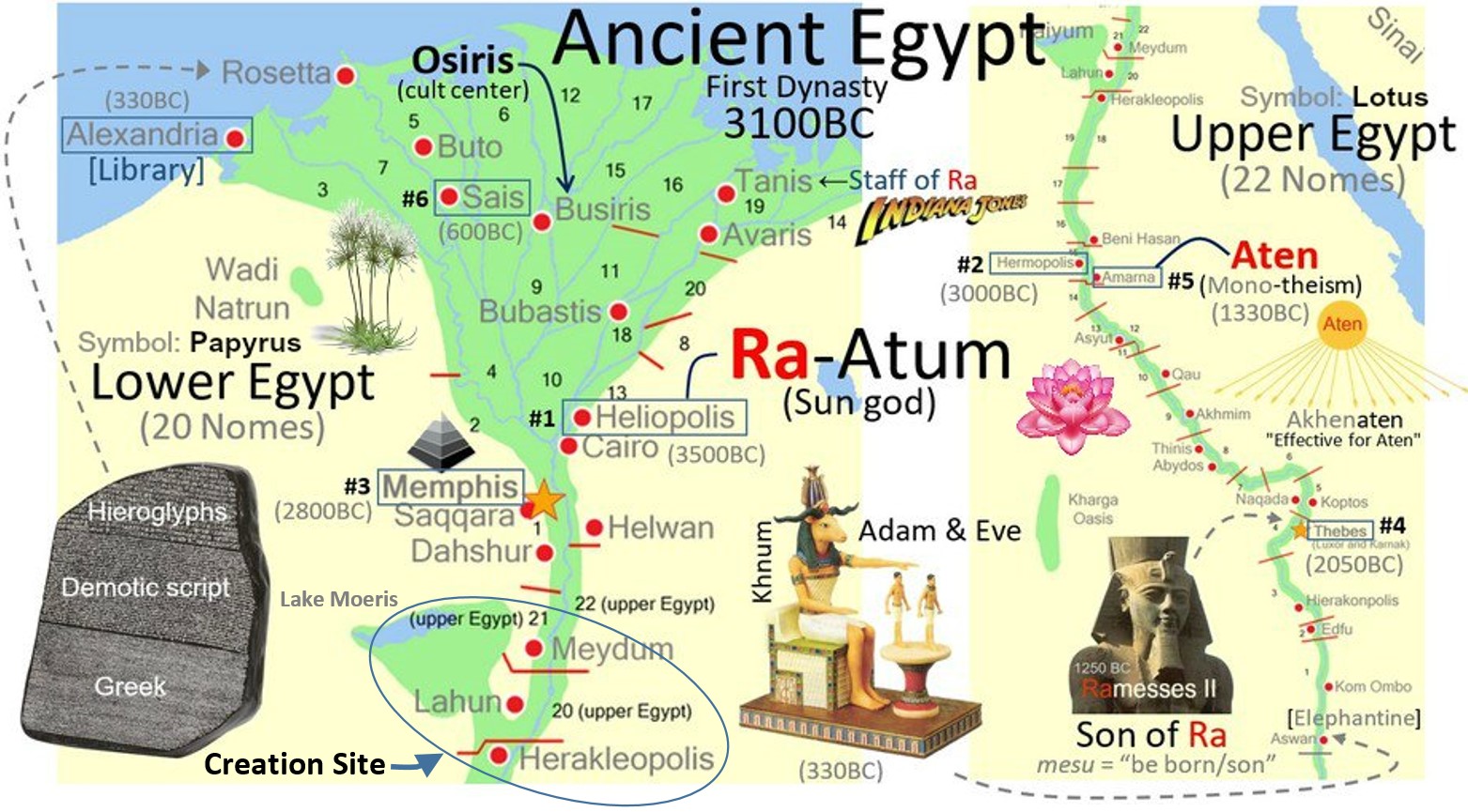 Here, as we see, much of Hinduism has its conceptual model rooted in Upper Egyptian theology, which can be compared to Judaism-based theologies (Christianity and Islam) which have much of their story-telling surrounding papyrus plant models (Lower Egyptian theology).

SB 3.8.10 (Ѻ):  At that time when the three worlds were submerged in water, Garbhodakaśāyī Viṣṇu [Nun] was alone, lying on His bedstead, the great snake Ananta [Apep], and although He appeared to be in slumber in His own internal potency, free from the action of the external energy, His eyes were not completely closed.

SB 3.8.11  (Ѻ): Just like the strength of fire within fuel wood, the Lord remained within the water of dissolution, submerging all the living entities in their subtle bodies. He lay in the self-invigorated energy called kāla.

SB 3.8.12  (Ѻ): The Lord lay down for a thousand cycles of four yugas in His internal potency, and by His external energy He appeared to be sleeping within the water. When the living entities were coming out for further development of their fruitive activities, actuated by the energy called kāla-śakti, He saw His transcendental body as bluish.

SB 3.8.13  (Ѻ): The subtle subject matter of creation, on which the Lord’s attention was fixed, was agitated by the material mode of passion, and thus the subtle form of creation pierced through His abdomen.

SB 3.8.14  (Ѻ):  Piercing through, this sum total form of the fruitive activity of the living entities took the shape of the bud of a lotus flower generated from the Personality of Viṣṇu, and by His supreme will it illuminated everything, like the sun, and dried up the vast waters of devastation.

SB 3.8.15  (Ѻ):  Into that universal lotus flower Lord Viṣṇu personally entered as the Supersoul, and when it was thus impregnated with all the modes of material nature, the personality of Vedic wisdom, whom we call the self-born, was generated.

SB 3.8.16  (Ѻ):  Brahmā [Ra], born out of the lotus flower, could not see the world, although he was situated in the whorl. He therefore circumambulated all of space, and while moving his eyes in all directions he achieved four heads in terms of the four directions.

SB 3.8.17  (Ѻ):  Lord Brahmā, situated in that lotus, could not perfectly understand the creation, the lotus or himself. At the end of the millennium the air of devastation began to move the water and the lotus in great circular waves.

SB 3.8.18  (Ѻ):  Lord Brahmā, in his ignorance, contemplated: Who am I that am situated on the top of this lotus? Wherefrom has it sprouted? There must be something downwards, and that from which this lotus has grown must be within the water.

SB 3.8.19 (Ѻ) :  Lord Brahmā, thus contemplating, entered the water through the channel of the stem of the lotus. But in spite of entering the stem and going nearer to the navel of Viṣṇu, he could not trace out the root.

Dharma | Maat
In Hinduism, the Egyptian concept of Maat, according to Muata Ashby (1997), is the forerunner to the Hindu concept of Dharma, meaning "order, righteousness, and justice". [6]

Egyptian | Origins
In 1300BC, the Book of Gates was being promoted (see: recension theory) as an afterlife text by the priests of Thebes, such as found on the sarcophagus of Seti I (1279BC), and on the walls of the tombs of the several kings of the 20th dynasty (1189-1077BC), in which, in the section or chapter called the “Tenth Hour of the Night”, one begins to see two-headed, four-armed god morph in the character of the dual god Set-Horus, as shown below: 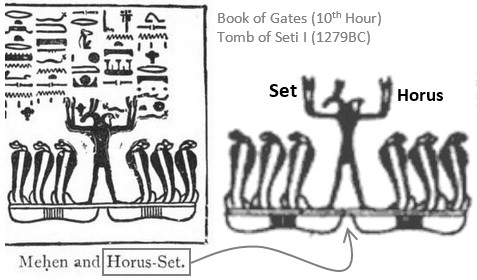 In 900BC, this double-headed four-armed god conception, would become characteristic of the Hindu god models, such as found in the three-headed god Brahma, pictured above, which itself is a god morph syncretism of the gods: Nun + Ra (great-great grandfather of Horus, per Heliopolis creation myth) + Atum (or keme).

Tesla | Vivekananda
In 1896, Indian Hindu monk Swami Vivekananda (Narendranath Datta) visited in New York with William Thomson, Hermann Helmholtz and Nikola Tesla; among whom, according to Howard W. Odum (1929), Helmholtz, at some point, expressed interest or “recommendation for research into spiritual things”. [1]

“Tesla thinks he can demonstrate that mathematically that force and matter are reducible to potential energy. I am to go see him next week to get this mathematical demonstration.”

Vivekananda believed, supposedly, that the harmony between Vedantic theories and and western science was explained by the following diagram, shown adjacent.

“The Brahmins give a wonderful account of their Chorcam or paradise, in which grew a tree that would have given man immortality had he been permitted to eat of it. They also believe that a god-made man was to be born of a virgin, by divine operation; hence the incarnation of their Juggernaut and the birth of Krishna in a grotto where he was adored by shepherds and angels.”

“The Hindu sacred writings contain all the myths and fables found in the Cristian Bible.”