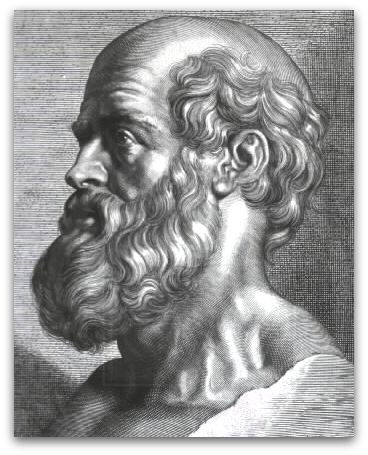 Animal heat
Hippocrates promoted an animal heat view of human animation in relation to fire; reasoning that “heat, a quantity which functions to animate, derives from an internal fire located in the left ventricle”. [1] This was referred to as the doctrine of internal heat. [2]

Affinity
Hippocrates, in the context of the history of affinity theory, in circa 410BC, promoted the theory that “like assorts with like”; sometimes called Plato's first law of affinity. [4]

The following are noted atheism-themed quotes:

“Men think epilepsy divine, merely because they do not understand it. We will one day understand what causes it, and then cease to call it divine. And so it is with everything in the universe.”

“Hippocrates in time arrived at the conclusion that he had not sought whether the heart or the head was the seat of either reason or sense in man and beast.”

— Jean de La Fontaine (c.1690), 29th fable quote; inscribed at the base of the 1869 statue of Democritus mediating on the seat of the soul, Paris

“Is there supernatural in disease?”