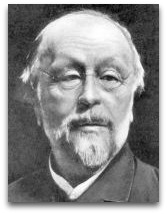 In hmolscience, Hippolyte Taine (1828-1893) (CR=26) was a French historian-philosopher who coined the term "human molecule", as the physical definition of one human being, in December of 1869 in the preface to his two volume book On Intelligence. [1]
Philosophy
In an 1854 “Essay on Livy” submitted to the French Academy, Taine had expressed his view that according to Dutch philosopher Benedict Spinoza, a human’s place in relation to nature, is not that of an empire within an empire, but of a part in a whole; that a person’s inner nature or being is subject to laws in the same way as the external world; moreover, that there is a dominate principle, a ruling faculty, which regulates thought and imparts an irresistible in inevitable impulse to the human machine. [4]

Human molecules
Taine, in the preface to his 1869 On Intelligence, famous stated ‘it is now admitted that the laws which rule formation, nutrition, locomotion, for bird or reptile, are but one example and application of more general laws which rule the formation, nutrition, locomotion, of every animal.’ He continues ‘in the same way we begin to admit that the laws which rule the development of religious conceptions, literary creations, scientific discoveries, in a nation, are only an application and example of laws that rule this same development at every moment and with all men.’ In coining the term 'human molecule', according to the

“In short, anyone who studies the man and he who studies men, psychologist and historian, separated by points of view, however, have the same object in view, so each new preview of one must be counted at the achievements of others is visible today, especially in history. We realize that to understand the changes of a human molecule or group of human molecules, we must make psychology .”

In sum, Taine states that ‘for the last fifteen years I have contributed to these special psychologies’. Moreover, ‘I now attempt a general psychology.’ He notes, however, that ‘to embrace this subject completely, this theory of the Intelligence (faculty of knowing) needs a theory of the will added to it.’ In his circa 1871 “Notes on England”, Taine had begun to allude to the view that a human is an “organized molecule” subject to spontaneous and continued transformation. [4] Taine uses the term again in 1878 multi-volume work Origins of Contemporary France, speaking about the “dust of separate human molecules”, but it difficult to infer what exactly he means by this. [3]

Adams
American biographer Ernest Samuels argues that American historian Henry Adams was significantly influenced by Taine’s suggestion that the object of the historian is to study and follow the transformations of human molecules and to write history as the psychology of human molecules. Specifically, Samuels notes that in circa 1870 Adams had become an editor of the North American Review and in 1873 he accepted the article “Taine’s Philosophy”, by James Bixby, for publication, wherein Taine’s philosophy of history is presented as applied psychology of human molecules and that Adams later adopted this view as his own. [5] To exemplify the influence of Taine on Adams, on 12 April 1885, while at extended stay at work in Washington, Adams wrote to his wife: [6]

“I am not prepared to deny or assert any proposition which concerns myself; but certainly this solitary struggle with platitudinous atoms, called men and women by courtesy, leads me to wish for my wife again. How did I ever hit on the only women in the world who fits my cravings and never sounds hollow anywhere? Social chemistry—the mutual attraction of equivalent human molecules—is a science yet to be created, for the fact is my daily study and only satisfaction in life.”

This is clearly seen in Adams’ 1910 A Letter to American Teachers of History, wherein Adams argues that the history must be viewed as transformations of groups of human molecules subject to the second law of thermodynamics.

“History is a mechanical problem. The only difference is that it cannot be measured by the same means or defined so exactly. It is a science analogous to physiology and zoology, not to geometry. My idea has lain on the ground since Montesquieu; I have only picked it up.”